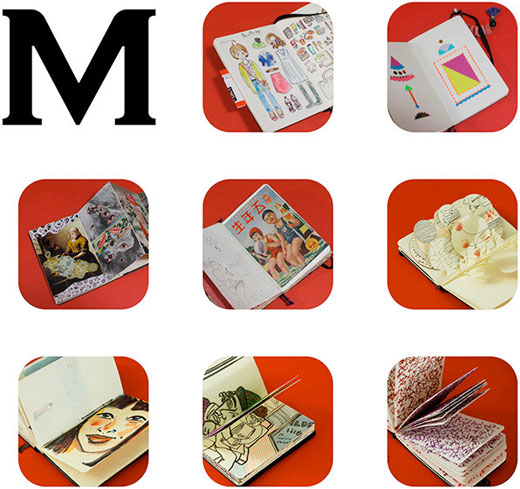 If you are a designer or just a creative soul chances are you own at least one of Moleskine‘s iconic black notebooks. The company, founded in 1997, brought back to life the legendary notebook used by artists and thinkers over the past two centuries. Today, the name Moleskine encompasses a family of objects: notebooks, diaries, journals, bags, writing instruments, reading accessories and even apps and print-on-demand services. To better reflect this ever-growing brand, Moleskine called in Milan-based agency Achilli Ghizzardi Associati to create a fluid visual icon that communicates its multi-faceted and open nature while unifying its many objects, types of users and brand values.

The new identity is a grid comprised of 9 modules. The top left corner is created from the M of Moleskine while the rest of the grid is built from eight rounded squares hinting at the notebook’s rounded edges.  Each module is a flexible space that can house a wealth of content: the letters of the company name, the colors and configurations of the collections, community creations and multimedia content will all fill the new Moleskine monogram.

The logotype remains unchanged apart from a more emphasized roundness to the curves of the letters, creating a proprietary font for the first time in the company’s history. Particular attention has been given to the letter M, which becomes the pivot for the whole visual identity.

The monogram is adaptable to a variety of formats, media and uses. The monogram and its nine modules will be used as a frame for photo galleries, video sets and social media initiatives, in video billboards and new store openings, appearing on new releases from 2014. In this way the monogram becomes a meeting place of analog and digital, more of which the brand aims to open up to aid the creative process.

What would you place in the new Moleskine monogram? We’d love to see your creations and we are pretty sure Moleskine would too.