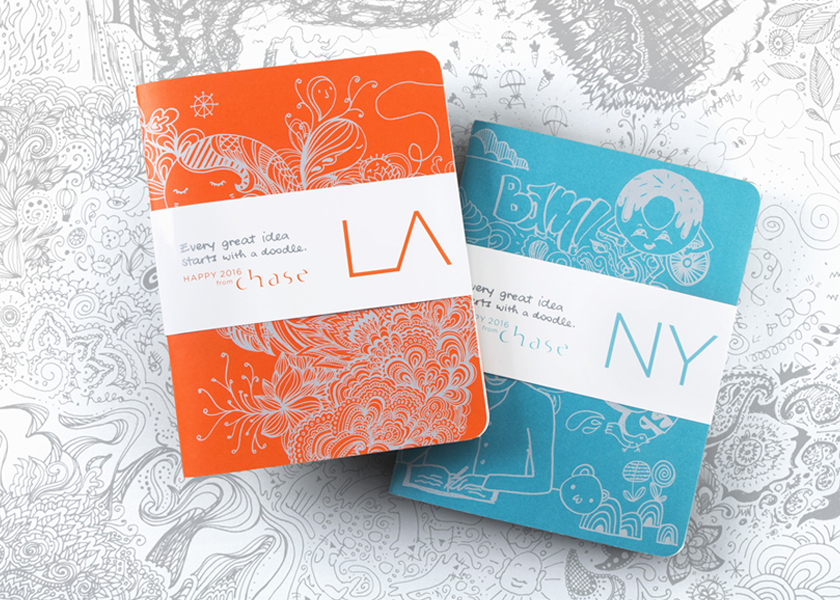 Guest Blogpost by Margo Chase, Executive Creative Director, Chase Design Group. As a gift to clients at the end of 2015, the design firm produced a set of colorful custom notebooks whose covers were adorned with the artwork sourced from a year’s worth of long conference calls, meant to encourage this creative drawing exercise. 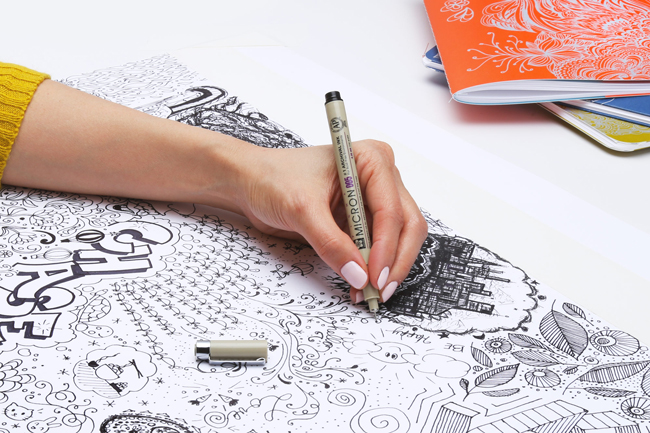 Lurking in the margins of notebooks, on envelopes, napkins and scraps of paper the world over, lies evidence of active minds at work. Whether on the phone, sitting through a tedious board meeting or brainstorming their next big creative idea, doodling is a quiet, and often unconscious, habit for many. Commonly, however, its validity as a productive activity is called into question. Kids in schools are reprimanded for ‘idly scribbling’ in class, executives are deemed rude for doodling during client meetings, even Former Secretary of State, Hillary Clinton, was chastised by The Telegraph for being “caught in the act” during a United Nations Security Council meeting. At Chase, we are of a different mindset. We believe that doodling is often the first step to a great idea. 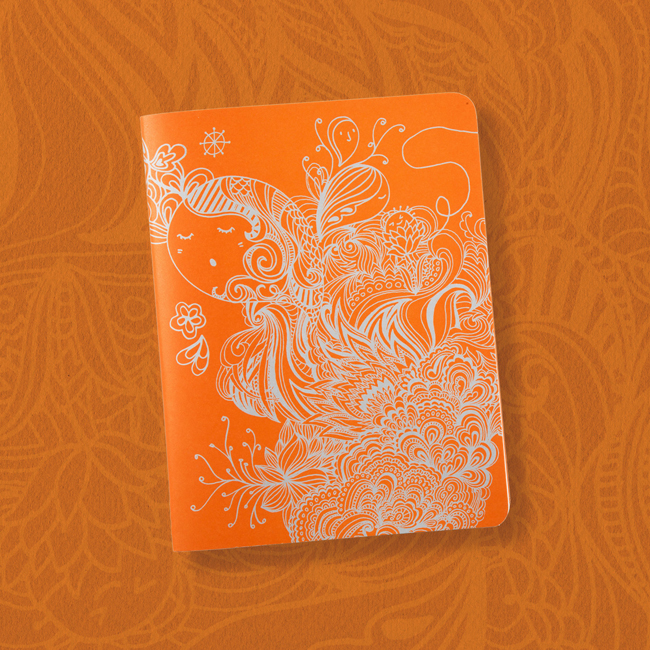 The Oxford English Dictionary defines the word ‘doodle’ as “a rough drawing made absentmindedly.” But as Sunni Brown, author of “The Doodle Revolution” suggests, there is something that is very limiting–even damning–about this kind of definition. The connotation of pointlessness attempts to validate the notion that doodles have no cognitive benefit in social consciousness. For Brown, as it is for us, doodling is not “mindless scratching” but rather a way to engage the mind and assist with cognitive processing. 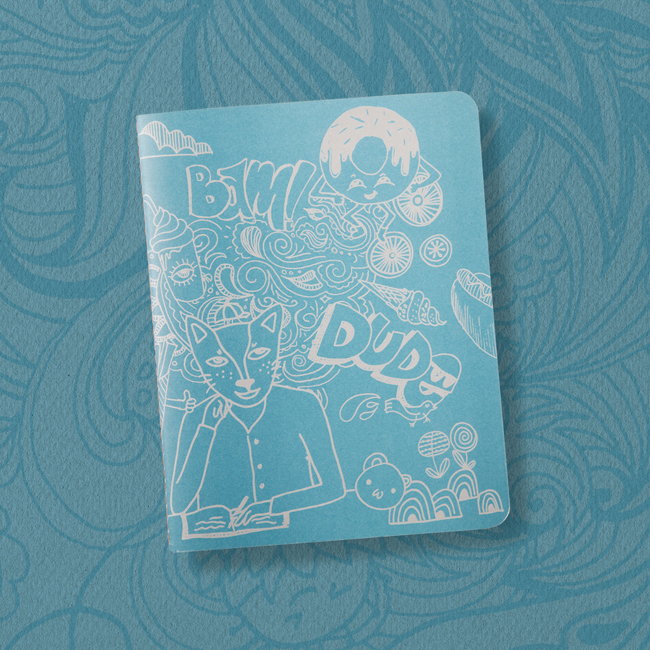 In 2009, the Journal of Applied Cognitive Psychology published a study by researcher Jackie Andrade, which unveiled the connection between doodling and cognition. Andrade asked volunteers to listen to a banal voicemail. Some of the volunteers were asked to doodle while listening, others were asked not to doodle. She found that doodlers remembered 29% more details of the voicemail than the group who listened alone; a clear indication that doodling kept their minds focused where it may have wandered. 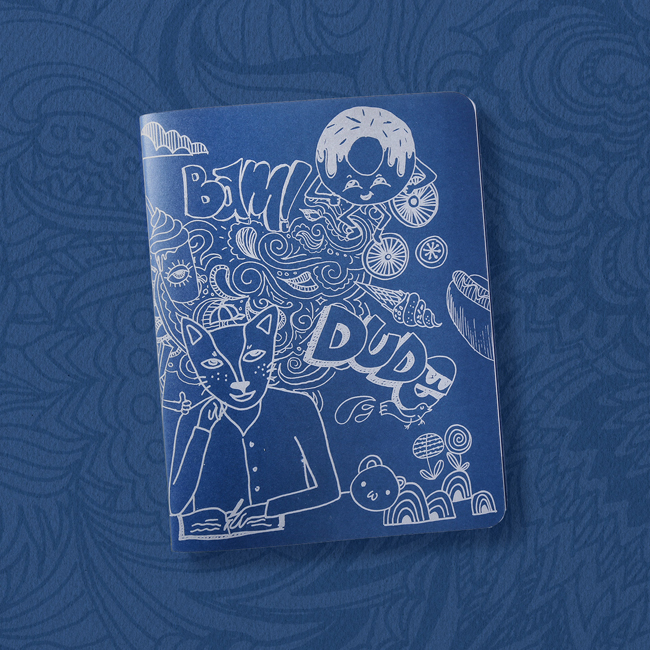 Dianne Bleck founder of The Doodle Institute and author of “Discovering Doodles: The Complete Series” believes that “…when you put pen to paper, you open your heart to ideas, insight and inspiration…” Even further, Bleck explores the healing properties of doodling as a means of relieving stress and “[attracting] positive energy.” It is this line of thinking that brought to mind the idea of doodling as a form of Creative Meditation. This is the role of doodling for us. It is a way for us to focus our thoughts, keep calm and keep our creative minds humming. In my own process, doodling is a way for me to relieve stress and open my mind to ideas that may not occur to me otherwise. Even if the doodles themselves are irrelevant to anything that I need to accomplish, whether a new logo for a TV series or a fresh approach to design, doodling gives my mind the room it needs to explore new creative possibilities. 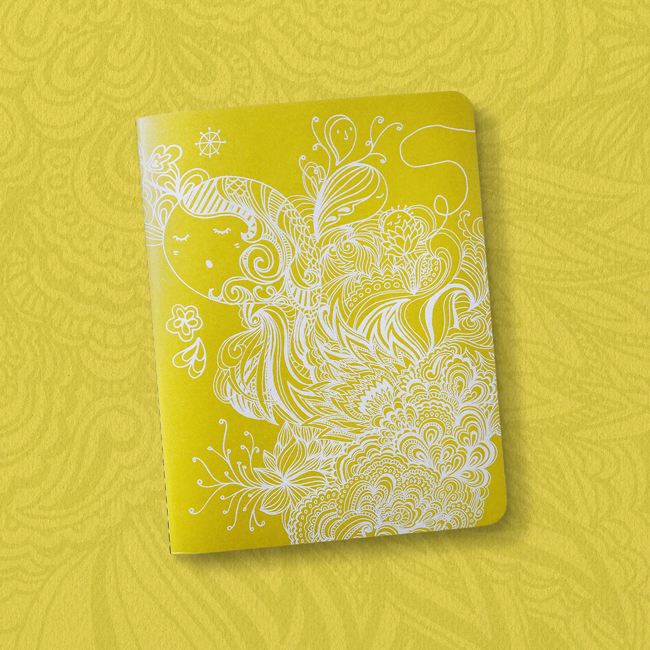 So next time you catch someone doodling, encourage them. They may be on the verge of something truly awesome.