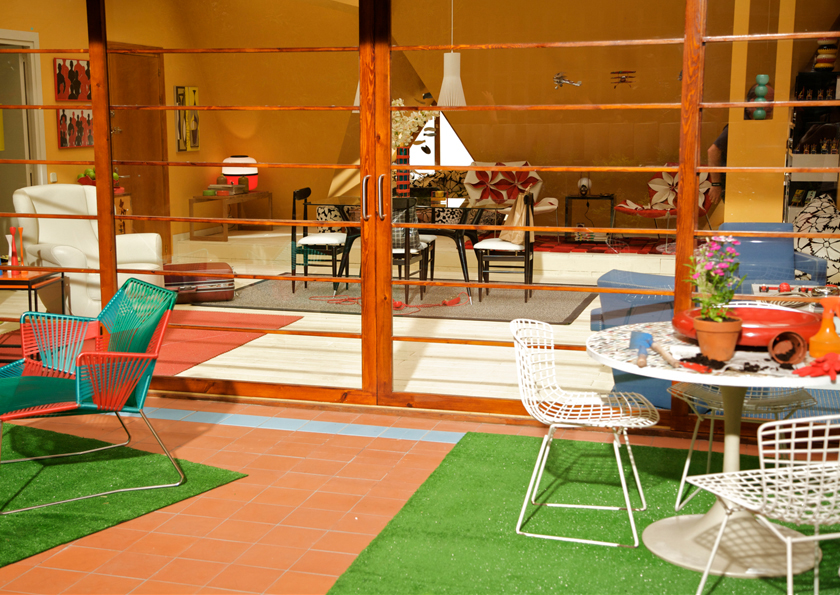 Sometimes when I watch a movie I have a hard time focusing on the plot because I am so mesmerized by the set. Here are 10 of my favorite interiors from movies old and new.

* This list is by no means comprehensive and I look forward to you adding your favorites in the comments section. 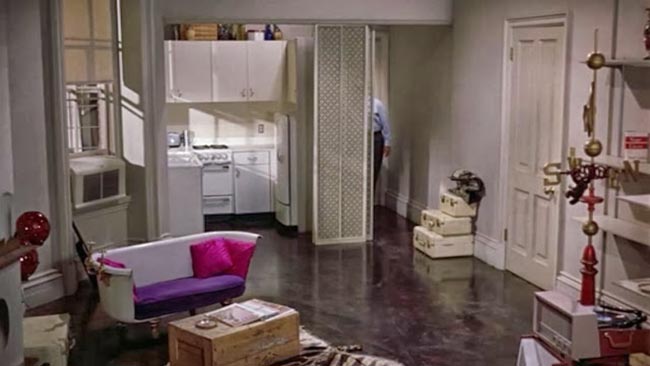 This iconic film takes place in the heart of New York City. We find Holly Golightly (Audrey Hepburn), an eccentric playgirl, in a sparsely adorned brownstone that epitomizes the bohemian lifestyle. The palette is mostly neutral other than a few pops of color from the cushion on her fabulous bathtub sofa. Her flat also features a stack of white suitcases, a box crate as a coffee table, some open shelving and a gold weather vane – mostly vintage and junk yard fines. The original hipster! 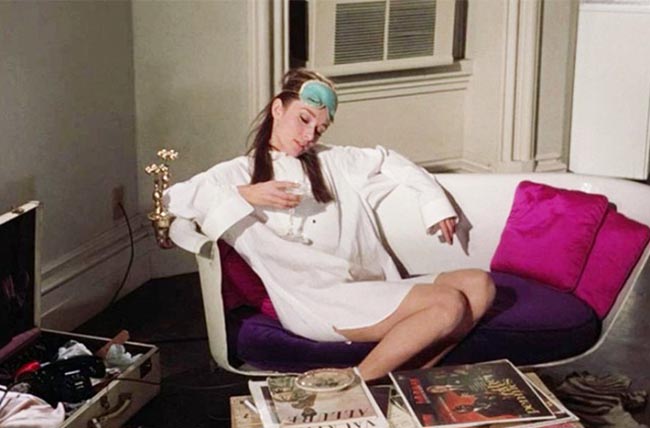 Later in the film, Holly sets her sights on the wealthy future President of Brazil, José Luis de Vilallonga. She redecorates her apartment with “real” furniture including a bull’s head. The zebra rug stays put as it should. 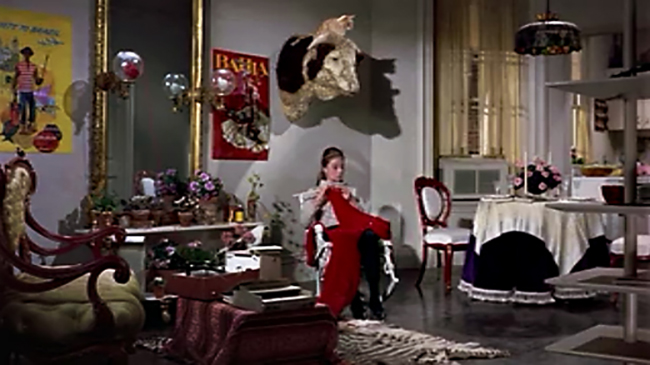 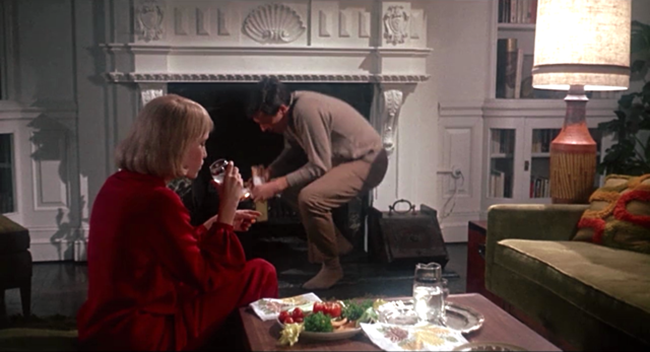 In this haunting movie, Rosemary Woodhouse (Mia Farrow) and her husband Guy move into an opulent Manhattan apartment, set in the storied Dakota building. When they arrive the apartment is full of dark wood paneling and heavy drapes but Rosemary quickly does a complete makeover. What she achieves is nothing short of mid-century modern perfection. Heavy drapes are replaced with sheers, the walls are white washed and Danish-Modern furniture can be found throughout the house. 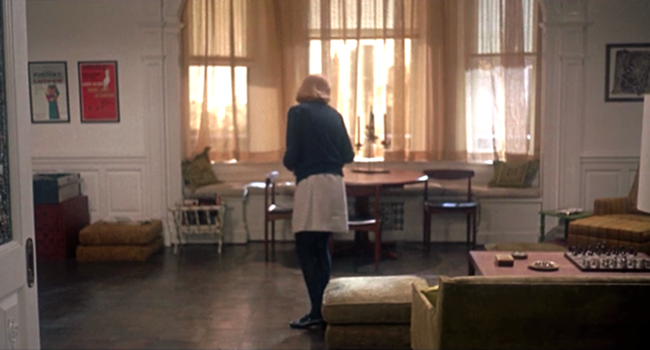 I think it would be fair to say that most Wes Anderson interiors can be added to this selection but The Royal Tenenbaums tops the list for me. Scalamandré Zebra wallpaper and a gallery wall filled with portraits of Margot Tenenbaum are the perfect backdrop for this quirky movie chronicling the lives of sibling prodigies. 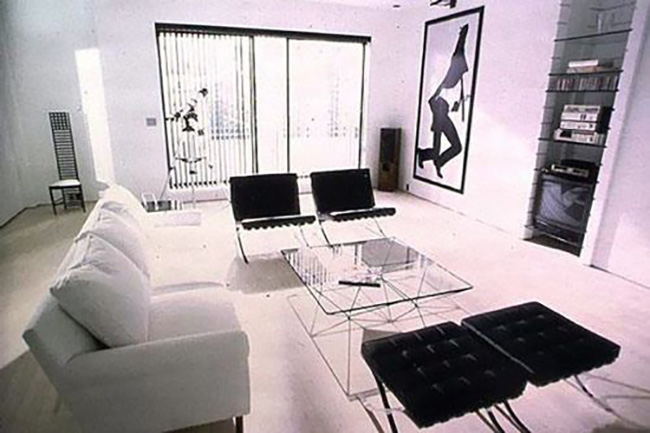 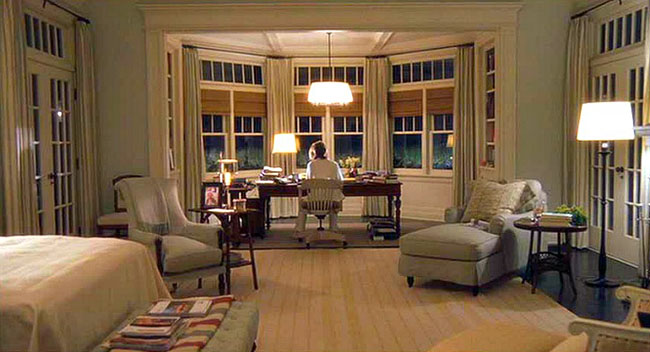 This is the first of Nancy Meyer’s movies to make this list but it won’t be the last. A director who always focuses on design does not disappoint with Something’s Gotta Give. When Erica Barry (Diane Keaton) retreats to her Hamptons house we are all secretly wishing we could come along for the ride. The home is decorated in a relaxed yet elegant neutral palette and the all-white kitchen cabinets are matched with soapstone countertops. Who wouldn’t covet Erica’s writing nook or the lines of plates stylishly flanking the open shelves in the dining room? 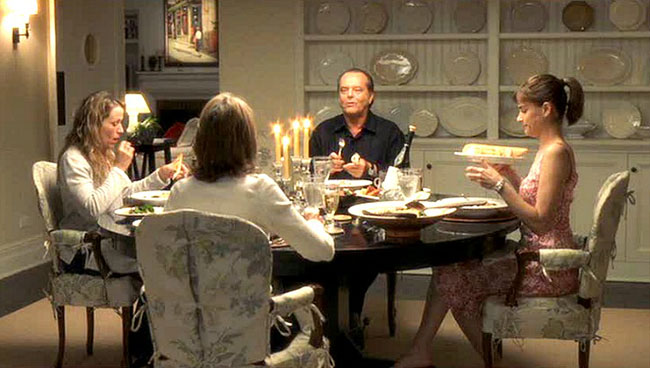 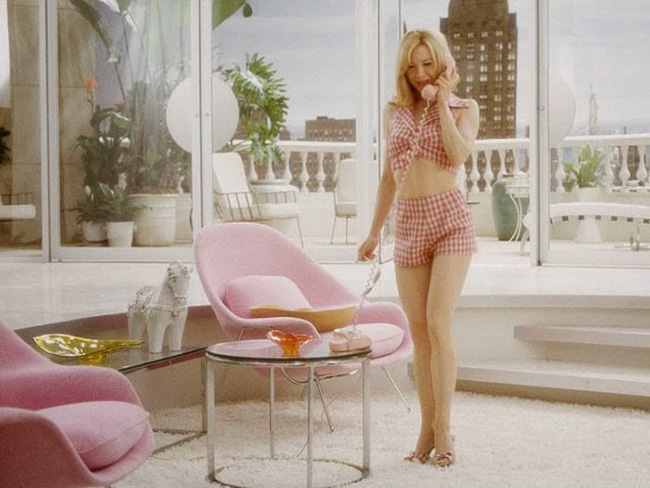 Barbara Novak’s (Renée Zellweger) groovy pad in Down with Love is an homage to 1960s New York. Pink womb chairs, bubble lamps and bar carts add to the cotton-candy depiction of an era just before the sexual revolution. Saturated colors and exaggerated scale fill this writer’s home and add to the mid-century mania. 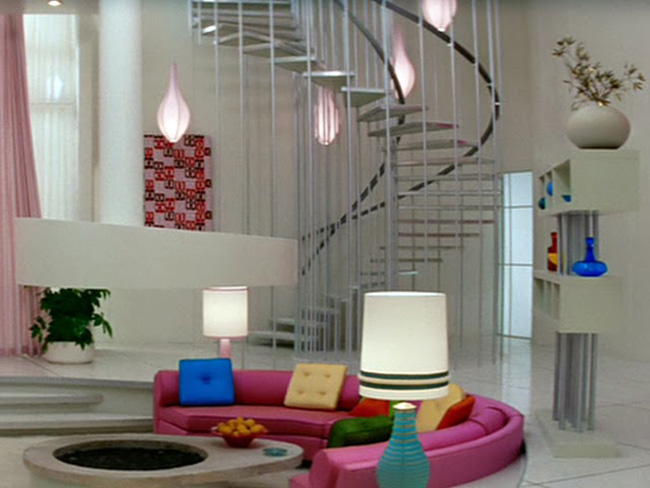 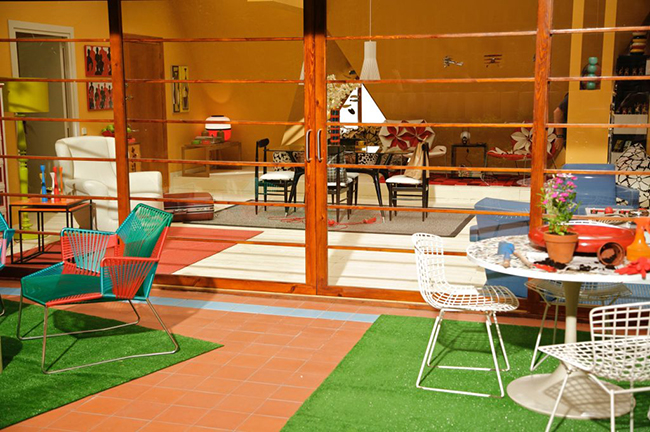 In Pedro Almodovar’s Broken Embraces, Lena (Penelope Cruz) is an aspiring actress stuck in an unhappy love affair with a wealthy film producer. In an effort to squash her ambitions he tells her that her their mansion needs to be redecorated. It doesn’t. It has grand 19th century rooms filled with Old Masters and Warhol-style paintings of guns, and a fantastic boudoir inspired by the early modernist designer Eileen Gray. The seating area is filled Pop art accents such as the Enzo Mari red apple wall hanging. The terrace of the apartment features an Eero Saarinen table with a customized ceramic tile top and Harry Bertoia white wire side chairs. Jonathan Adler is definitely swooning over this interior. 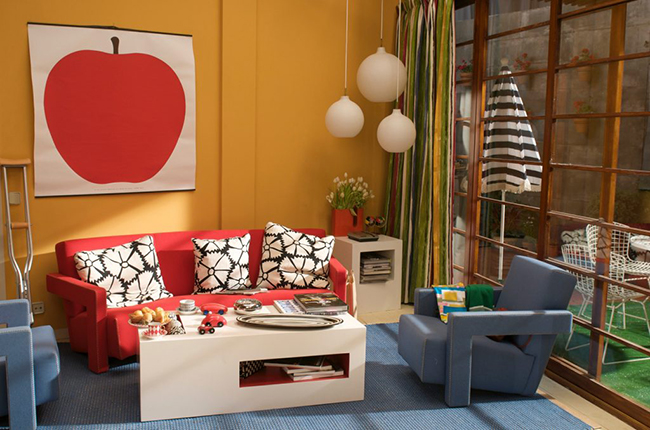 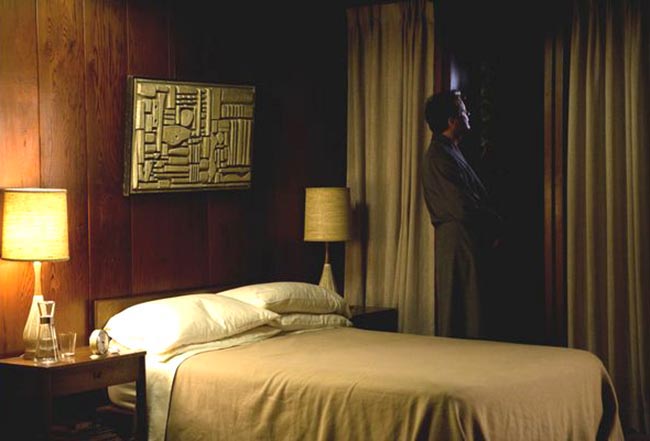 Legendary fashion designer Tom Ford directed and produced A Single Man, set in 1962, in the stunning Schaffer Residence, a modern home built by John Lautner in Glendale, California. George Falconer (Colin Firth) is a professor mourning the loss of his partner Jim. The house and decor reflect his emotional state and rely heavily on a palette of natural wood tones, with beige and ivory accessories. In George’s bedroom, we find classic mid-century accents like ceramic and wood lamps, an abstract sculpture and a modernist relief wall hanging. Conversely, his good friend Charley’s boudoir, exudes Hollywood Regency style. Oversized silver lamps flank a North African mirror and flokati and ikat prints are meshed seamlessly in this feminine sanctuary. 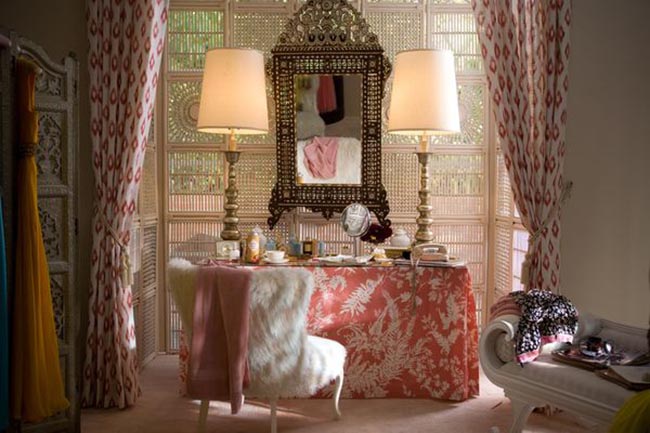 In Sex and the City 2, newlyweds Carrie (Sarah Jessica Parker) and Mr. Big (Chris Noth) move to an upper east side New York apartment. The space combines masculine elements, such as midcentury furnishings and dark woods, with whimsical rugs and cheerful fabrics. Carrie and Big’s living room includes a blue wool-mohair sofa and a pair of beige midcentury side chairs and in their dining room an oxidized-metal chandelier hangs above a French 1940s mahogany table. 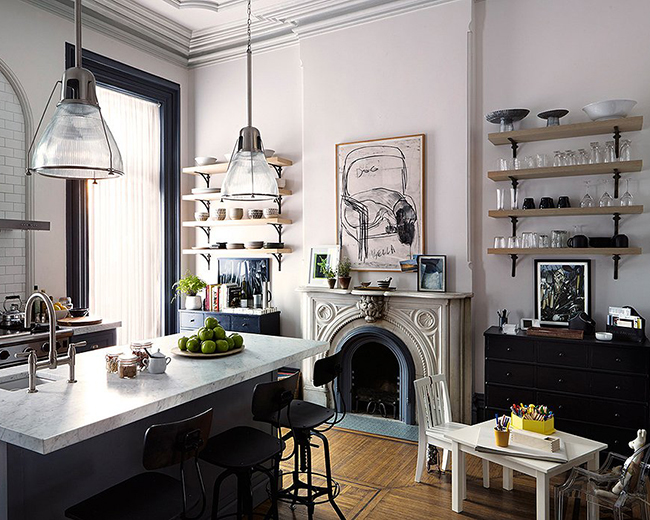 Nancy Meyers’s latest movie once again inspires us from the inside out. Although not on this list, Meyer’s incredible interiors in The Holiday and It’s Complicated can easily be added to this selection. The Intern tells the story of a 70-year-old retiree (Robert de Niro) who interns for a young entrepreneur (Anne Hathaway). Hathaway’s Brooklyn Brownstone is a haven for modern design. A Lindsey Adelman chandelier hangs above the dining table, Aerin Lauder sconces flank the master bed and Thonet chairs stand alongside George Nelson bubble lamps. The kitchen design combines industrial and rustic elements, including open shelving, a subway-tile backsplash, and a farmhouse sink. 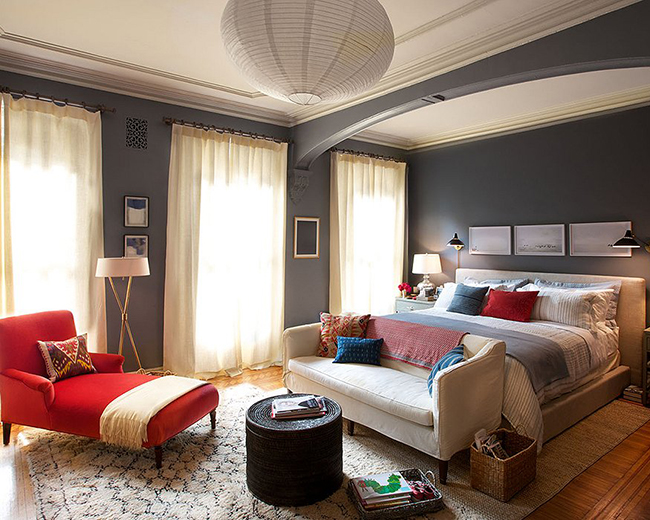