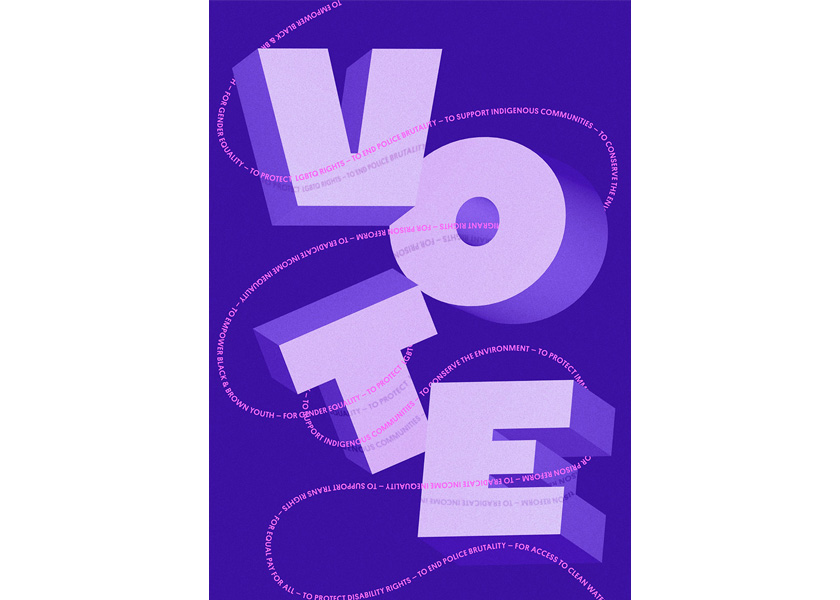 Every four years since 2000, AIGA has activated graphic designers to engage in a Get Out the Vote poster campaign. The campaign is part of AIGA’s Design for Democracy, an initiative to increase civic participation through design. In 2020, AIGA recognizes the centennial of the ratification of the 19th Amendment, granting women the right to vote in 1920 with a special edition of Get Out the Vote: Empowering the Women’s Vote.  Working in collaboration with the League of Women Voters and Nonprofit VOTE, AIGA aims to create a collection of public art and messages that can be used to commemorate 100 years of the women’s vote and encourage and inspire all voting-age populations to exercise their civic rights. “This project was conceived in 2018 — as a historic opportunity to unify and celebrate women of design while focusing their talents toward an important civic goal,” said project initiators Kelly Salchow MacArthur, Professor of Graphic Design at Michigan State University and President Emerita of AIGA Detroit; Nancy Skolos, Professor, Department of Graphic Design at Rhode Island School of Design and AIGA Medalist; and Frances Yllana, AIGA President’s Council Chair and AIGA Design for Democracy Chair. A core group of curated posters by women of design from the Empowering the Women’s Vote campaign will be on exhibit at Carnegie Mellon’s Institute for Contemporary Art (Pittsburgh PA); Michigan State University’s Union Art Gallery (East Lansing MI); Museum of Contemporary Art San Diego (San Diego CA); The Printing Museum (Houston TX); the RISD Museum (Providence RI); Theatre Squared (Fayetteville AK); among other institutions. “Civic engagement is part of the heart of design. Making information, especially voter information, accessible and understandable strengthens and enhances our democracy,” said AIGA Executive Director, Bennie F. Johnson.