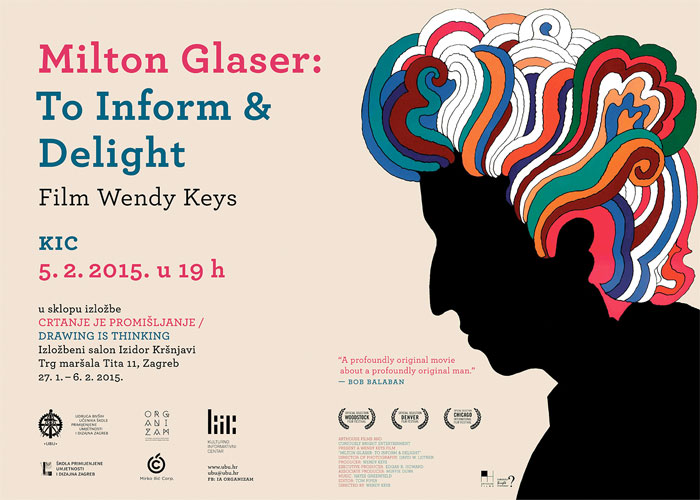 While Netflix is usually my go to for a good watch (mostly because it’s cheap), I often struggle to find high quality films. Nevertheless, I’ve managed to dig up some real gems that shouldn’t be missed. Here are my top 10 picks that are sure to enhance your design i-queue.

Milton Glaser: To Inform and Delight

This in-depth look at Milton Glaser,  just named the most influential graphic designer of the past half-century by GDUSA readers, is a must watch. This documentary explores Glaser’s prolific career which includes the famous “I Heart NY” campaign and his early days at New York magazine.

Eames: The Architect and The Painter

If you liked Charles and Ray Eames before you watched this documentary you will love them by the time you are done. This husband-and-wife team, widely considered America’s most important designers, excelled in  every discipline from furniture to photography. A wonderful look at the entire mid-century era.

Yes, it’s a classic by now but I can watch it again and again. Gary Hustwit’s unique documentary introduces us to Helvetica, a font whose readability has made it the most popular font in the world.

Helvetica’s lesser known successor is another Gary Hustwit masterpiece. Discover how manufactured objects that surround us such as cars, phones and chairs influence our daily lives with this revealing documentary, which features top industrial designers discussing their creative processes and professional objectives.

Page One: Inside the New York Times

An interesting peek inside the New York Times and how the venerable paper and its reporters responded to the massive changes in how news is gathered, analyzed and dispersed. This one is a bit out dated by now but the documentary’s exploration into new media is fascinating.

Director R.J. Cutler’s documentary offers a rare look inside Vogue as the fashion magazine’s influential editor, Anna Wintour, and creative director, Grace Coddington, produce the highly anticipated September issue. If you are a magazine lover or designer you won’t be able to peel your eyes off the screen.

An intimate portrait of 80-year-old  photographer Bill Cunningham who tirelessly bicycles around New York City recording what people are wearing  — both out on the sidewalk and in the salons of the wealthy. His two weekly columns in the Sunday Times have captured the hearts of New Yorkers for over 40 years and Bill Cunningham captured mine with this brilliant portrayal of a true gentleman and professional.

Filmmakers Aaron Rose and Joshua Leonard profile a collective of underground artists and filmmakers — including Shepard Fairey — whose work made an indelible mark on mainstream fashion, film and music in the 1990s.

An exploration into the mysterious world of advertising with amazing interviews with the talented minds that created famous taglines such as “Where’s the Beef?” and “Just Do It.”

This documentary highlights the Hamilton Wood Type Museum in Two Rivers WI, which also serves as an old-fashioned print shop where contemporary art merges with traditional printing techniques. One weekend each month, artists from all over the world arrive at the museum to collaborate with retired printers as they share their design methods and create exciting new artwork. Unfortunately, this is DVD only but it’s worth waiting for your snail mail.

So here are my top picks. Have any more to add to the queue? Let me know in the comments section.