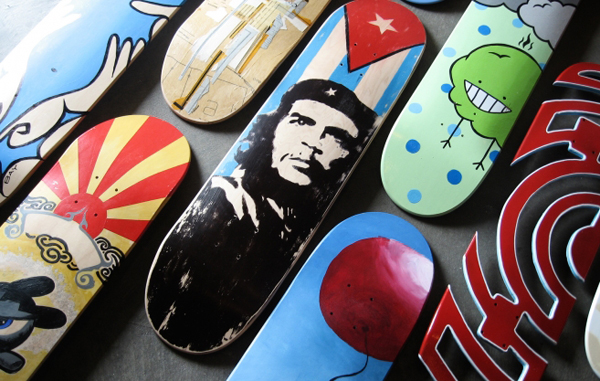 When you think of skateboarding, an entire subculture springs to mind. Hairstyles, fashion, music and art have all been inspired by the sport. Skate deck art has been the face of the skate world since the beginning, and it was the inspiration behind the installation currently housed on the second floor of BFG Headquarters in Hilton Head, South Carolina. Created entirely by inhouse staff, the skate deck project began when BFG designers received a board and, in the spirit of skate culture, no rules. The results were varied, bold and way too cool to put your feet on. 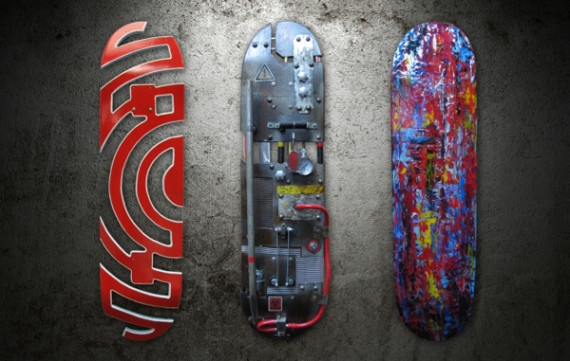 Everything came full circle for Senior Art Director Jeff Smith when he took a jigsaw to his board to create his “Bullz Eye” piece. His inspiration was simple: an ongoing fascination with circles, both concentric and perfect. For Jeff, the depth of this affinity ranges from the significance of circles in scientific and mathematical applications to the work of one of his favorite contemporary artists, Kenneth Noland. “I wanted to keep it minimal in design and take away to create its uniqueness rather than adding to it,” he says. 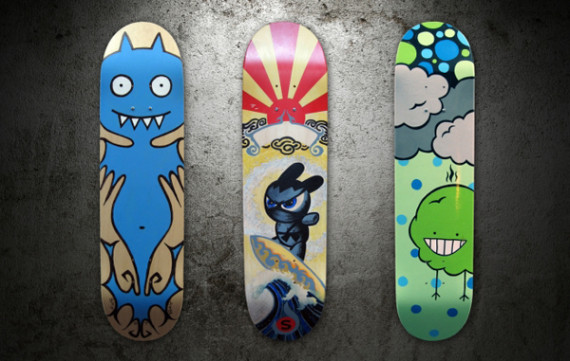 BFG Vice President & Executive Creative Director Scott Seymour found his inspiration among his children’s favorite toys. Using acrylic materials, he created a graphic interpretation of the UglyDoll, Ice Bat. The character, which lives in an ice cave inside an icebox, hangs upside down and has the power to turn anything it touches into ice. Scott’s skate deck also includes a shout out to his two kids with their nicknames, Bay (Bailey) and Sky (Skyler), incorporated into the design.

Art Director Josh Barrett revisited his days at the Savannah College of Art and Design for his skate deck-a Shepard Fairey homage inspired by the artist’s visit to the school. “He spent some time in Savannah and had a few seminars about his urban art. I printed a bunch of paper stickers and bombed Savannah,” Josh says. “The Omen,” he explains, is an homage to the perceived “omen” that guerilla art and graffiti have been given. “Plus,” he says, “how spooky is that image of Damien?”

Of all the skate decks, Art Director Richard Vetter’s looks the most like it’s been taken for a ride. And thrown. And kicked. And shot at. A former Marine, Richard used his military background for inspiration in creating a skate deck that looks like it’s “been through the war.” After torturing his board with a hammer and a drill, he added screws to resemble the side of a battle ship or tank and fused together a BFG camouflage pattern and a haunting image of a WWII vet. He named it “Whiskey Tango Foxtrot” and (hopefully) stopped throwing it around.