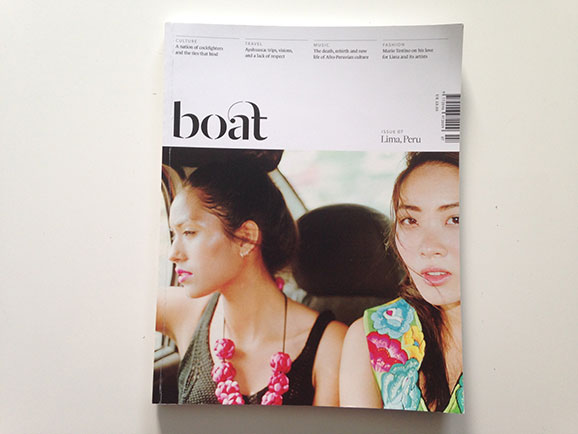 Design Week called Boat magazine “One of the most exciting new titles we’ve seen in a while. A brilliant concept and equally brilliant execution.” Creative Review couldn’t resist a seaworthy metaphor in its praise, “Still moving, Boat Magazine continues to be one of the most inspiring ventures out there.” While The Rumpus, a San Francisco-based culture mag with the tagline, “A love letter to the convict in your heart” clearly enjoyed the prison library duties, “This is the best magazine I have read in a long time — one of the most creative, beautiful, and engaging things to ever land in my mailbox.”

Editor Erin Spens and Creative Director Davey Spens launched Boat magazine in 2011, as a project of Boat Studio in East London. Like many new niche magazines in the new publishing model both online and offline, Boat also served as a portfolio piece for the Studio except its proposition was always much more conceptual and interesting. Not only did each issue focus on a single city, but for each issue, the magazine team relocated to the city it was featuring.

We often think of research as a kind of ‘before’ in a project, that it’s the stuff we need to help us succeed on a brief for a task that’s already set, research as a kind of backstory for a problem that’s already been defined. But quality research becomes experiment, it introduces disorder into a familiar working process and changes goals, changes thinking, changes the problem we set out to address and gives us a new opportunity. Rocket engineer Wernher Von Braun once said that, “research is what I’m doing when I don’t know what I’m doing.” Which is how Boat Studio redefined the ‘Travel’ magazine – by travelling. Research is about not-knowing.

Boat magazine plugged into the urban-centric trends of globalization, where the commercial and cultural power of cities such as London challenge that of the nation state, but it explored cities who have undergone enormous change, through war such as Sarajevo, or through crisis-capitalism such as Detroit, Athens, Reykjavik.

In the interview below Editor Erin Spens explains how Boat’s nomadic working process evolved, the studio in the early issues closing itself down in its London base then reforming in the city that was being covered in its issue – up till now these cities include Sarajevo, Detroit, London, Athens, Kyoto, Reykjavik, Lima. Boat (what other name would a nomadic studio and magazine have?) reformats the Travel magazine as part anthropology, part culture, part geography. So the Reykjavik issue includes features on geothermal energy, William Gershom Collingwood’s saga paintings, genomics and a restaurant where each day the suppliers of the food get their photo placed on a ‘wall-of-fame’ – the face of provenance. 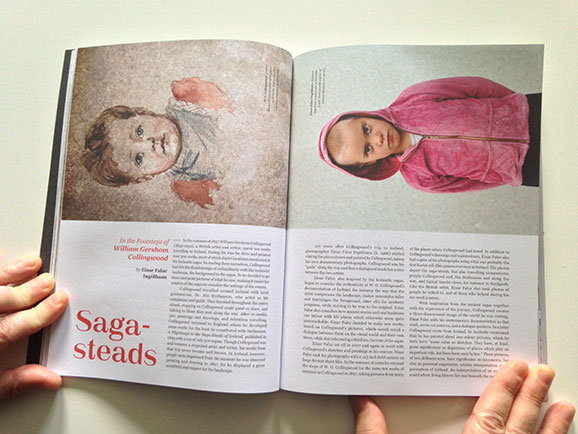 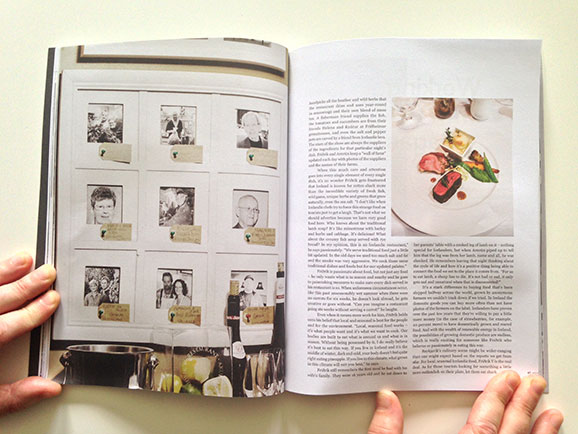 As much as the journalism and the stories are a carefully selected slice of life, it’s how the text is married with images that makes Boat unique – the images are rarely obvious, and each issue has a slightly different colour palette that reflects the city as much as the stories. It’s the geography of colour that in the current issue mixes features on folk art,  to a feature on a highly innovative recycling scheme to an article on the culture surrounding the hallucinogenic Ayahuasca plant. 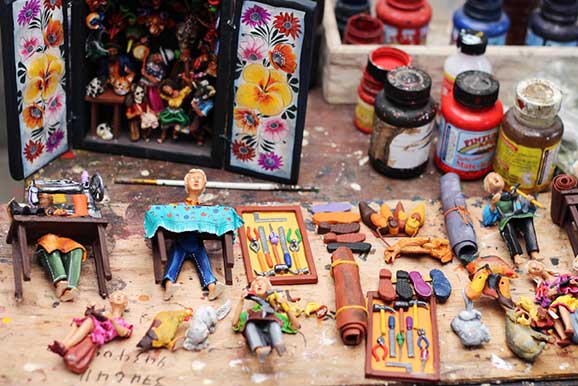 For Boat Magazine Issue 07, Lima. Master ‘retablo’ artist Claudio Jimenez-Quispe’s workbench where he is creating a cobbler-themed retablo. A ‘retablo’ is a kind of religious art 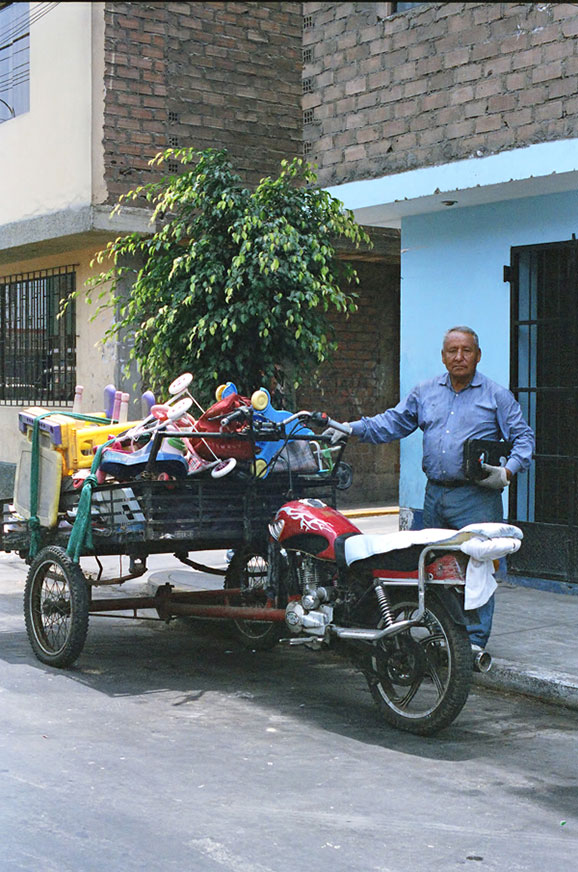 Could you tell us a little about your educational/professional backgrounds?
Erin Spens: I worked in New York in printing and display design, for high-end fashion brands. I helped to design, produce, and then install window displays and in-store displays all along 5th Avenue and Madison Avenue. I became familiar with printing production and design processes but I’ve always wanted to be a writer and that desire only got stronger the longer I worked in other fields. I’ve kept a journal my whole life and I’ve always had writing projects going on the side so when I met my husband and moved to England without a work visa, I was forced to step back and work out what I really wanted to do. We started a creative agency together and the first time we had a slow month, we decided to do something fun together as a studio – that’s how Boat Magazine started.

Was Boat Studio always conceived as having a nomadic component, or did it emerge with the magazine?
Erin Spens: Boat Studio was always based in London but when we had that slow month we thought it would be interesting to take the studio away and set it down in a new city, working on a project together. None of us really knew anything about Sarajevo and the flights were cheap so we booked a whole month there. We closed our other projects down that time so that we could focus totally on gathering really amazing content in Sarajevo and then we brought it back to London and put it together in a magazine. To have an entire month in an interesting city with nothing to do but explore, meet the locals, learn the history and write, photograph, and draw – it’s a dream, really, and was so good for us all creatively. 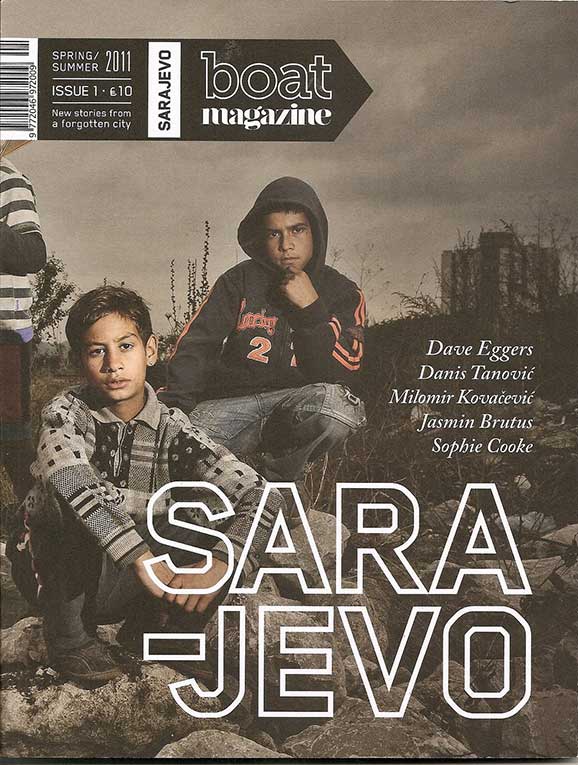 How does doing the magazine impact on the rest of your work, both logistically in terms of being away, but also creatively?
Erin Spens: Sarajevo is the only issue we closed down our other work for and focused totally on the magazine. As the magazine has grown, we’ve had to split the studio work away from the magazine in order to keep a focus on both. Inevitably the work each side of the studio is doing inspires the other, but we’ve had to separate them a bit more to make sure one doesn’t get lost in the other. Logistically that means that the entire studio doesn’t come with us to the focus city for each issue anymore. Now we handpick the team for each issue based on the city and what the needs are around it. This seems to work well and since the studio still subsidizes the magazine a bit, it’s been a necessary but hard decision to make. 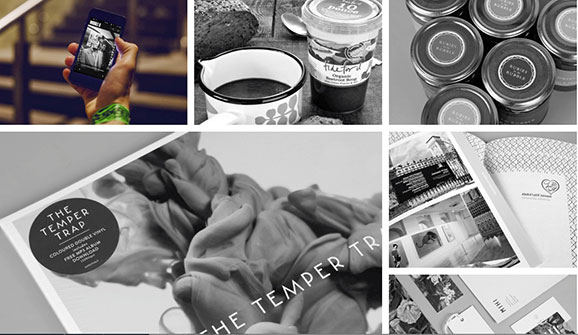 Boat’s tagline is’ Travel to the Heart of a City’. In what sense is this a ‘Travel’ magazine? What reference points, inspiration in other magazines or books did you have in terms of words, images, design?
Erin Spens: That’s a great question and something we wrestle with a lot. As a magazine that needs to sell some copies in order to keep going (we rely on sales of copies, not advertising), we need to sit well on shelves and that means deciding what ‘genre’ we fit in. Travel is the best fit for us in terms of how bookstores categorize magazines, but you’re right, it’s not the perfect label for us. The content in Boat is much more about the culture of a city than what you find in traditional travel magazines. We are all about the people that make up the city and the incredible stories and history of a place which we believe will give you a better understanding of the city than you would by staying in the perfect hotel or making the right reservation. It’s always about the people.

To find out more and to buy issues of Boat, click here.
Read the rest of the interview with Boat Magazine’s Editor Erin Spens on the Image Source blog.