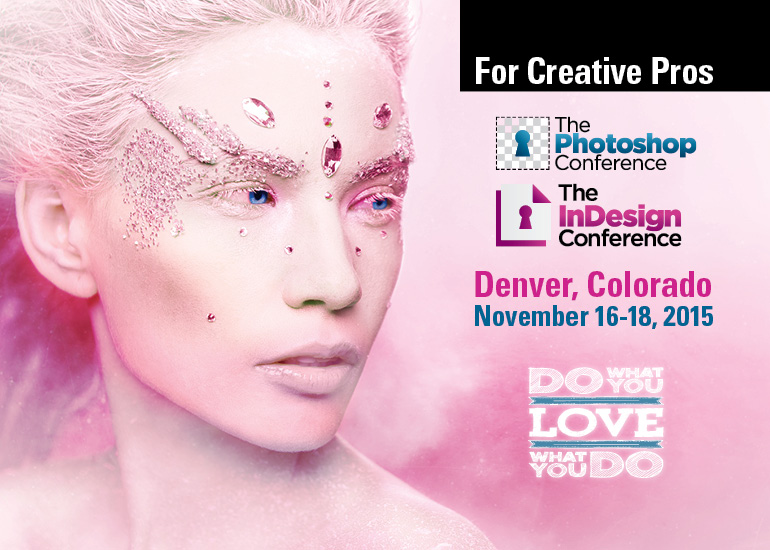 The answer is clear: it’s the right tool at the right time. InDesign has become the “go to” software application  for the print and digital realms, and has become even more critical since the recent release of Creative Cloud 2015. And that’s not just me speaking: Forbes Magazine recently noted that InDesign (and, by the way, Photoshop, too) has become “a highly sought-after skill for many types of positions” including graphic design, editorial roles and social media management.

An exceptional opportunity to improve your InDesign skills is coming soon. The InDesign Conference is set for November 16–18 at the Marriott City Center in Denver CO. With three days of non-stop learning and networking, you’ll discover what industry experts and members of the Adobe development team suggest you know to power up your on-the-job InDesign skills. GDUSA readers who have attended in the past tell me that they come back filled with useful tips, in-depth knowledge, and excitement to enhance their jobs and careers.

The organizers have put together an all-star lineup of speakers. These include, among many others, InDesign gurus:

• David Blatner, co-host of PePcon and InDesignSecrets.com, the publisher of InDesign Magazine, and the author or co-author of 15 books including Real World InDesign

• Russell Viers, a frequent speaker at publishing events including the HOW Conference, The InDesign Conference, IFRA, and PePcon, who has taught many major publications and designers to work faster and improve quality

• Michael Ninness, currently Sr. Director of Product Management for the Design products at Adobe, including InDesign, Illustrator, and Muse, with 20+ years of experience at Adobe, Microsoft and lynda.com

• Anne-Marie Concepcion, known as “Her Geekness”  she is a co-producer of PePcon, a digital publishing expert and owner of Seneca Design & Training and, along with partner David Blatner, co-founder of InDesignSecrets.com, and co-publisher of InDesign Magazine and CreativePro.

Among the dozens of skill-building sessions are: InDesign Power Tips; Tables, Troubleshooting and Long Document Techniques; Interactive PDFs That Work Everywhere; Brilliant Type: Crafting Beautiful Text;  Best Practices: Image Workflow and Editorial Workflow; and so many more. The list of sessions is too long to note here, but you can see the entire schedule on the site.

All in all, it’s a terrific opportunity for graphic designers to strengthen your skills whatever your skill level; to stay relevant in an fast changing industry where new products and techniques emerge daily; to learn the future of InDesign as Adobe rolls out new features this Fall; get face-to-face with Adobe product managers and engineers; and to make valuable connections with lots of networking opportunities.

The Photoshop Conference is (finally!) an event oriented to designers, production artists and publishers — in other words for those who create and edit images in Photoshop more than shoot them. It’s a chance to see many Photoshop masters in one place — think Deke McClelland, Nigel French, Colin Smith, Lesa Snider — and to learn skills such as Creating and Adapting a Logo with Photoshop and Illustrator, using RGB in a CMYK world, Photoshop Retouching for Designers, Vector Madness: Combining Pixels and Paths, and Compositing and Masking.

Seating is limited so Register today. Remember to use discount code GDUSA for $50 off any multi-day pass. My take is that you’ll learn, you’ll make connections, you’ll be inspired — and, perhaps most important, it’s a positive step for your job and career.