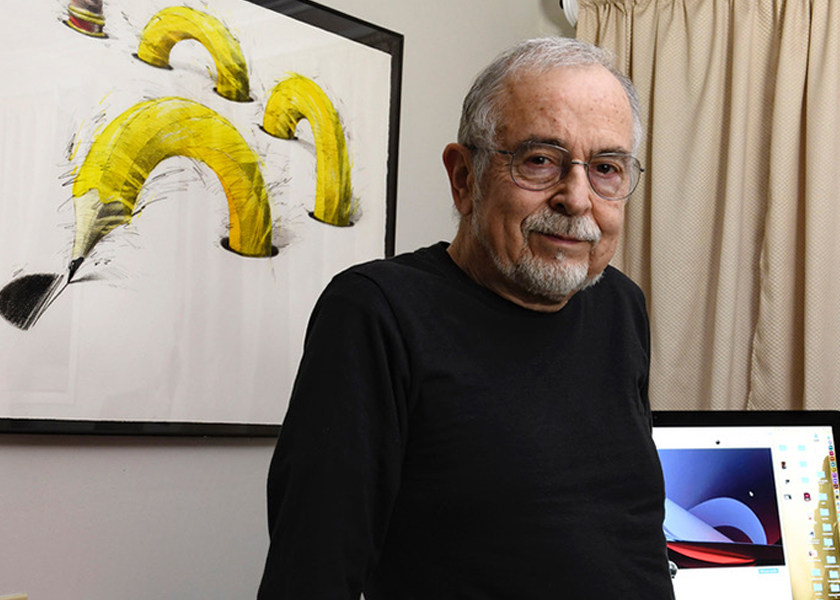 GDUSA’s 57th annual People To Watch special feature is now at the printer. While we wait patiently for the presses and bindery to work their magic … we’ll start to roll out the selections, beginning with GAF Creative Director Carlos Caicedo who has led the rejuvenation of the leading roofing manufacturer’s branding and visual identity. Watch for more ‘People’ later this week.

Three-time David Ogilvy Award Winner Carlos Caicedo knows the power behind a compelling story. After all, he did begin his advertising career as a writer. Born in Colombia, Carlos studied the humanities before finding his calling in design. Through honest, authentic visuals and an ability to speak to the heart, he creates narratives that make meaningful connections with consumers. Carlos called industry giant Ogilvy home for 25 years, working on such brands as American Express, Cotton, Hershey, and Deloitte.

For the past 13 years, he’s been Head Creative Director of the inhouse agency at GAF of Parsippany NJ, North America’s leading roofing manufacturer. During his tenure, Carlos and the creative team have won multiple GDUSA awards. His other awards include the Clio, Effie, London International Award, and Art Directors Club of New York Award. When he’s not directing national campaigns or inspiring designers, Carlos continues to craft his own story as an accomplished fine artist and photographer, with paintings and photographs being shown across the globe. In 2019, his series “The magic world of paper” received a Silver Award from Graphis, and his photography of pencils won a Gold award at the Trierenberg Super Circuit in Linz, Austria.

On The Future of the Graphic Design Business?

The future is bright. The future is NOW. The need for people who can express a concept with fewer words and pictures that connects with an ever-changing audience is more critical than ever. Something that hasn’t changed, though, and never will, is the power of ideas. And nothing can replace the efficacy of emotions attached to them. For those in the field, the gap between the Art Director and the Designer is closing. It’s a trend we all welcome. Opportunities are there for all to seize.

• Lead by example. • Listen. It’s the most effective way of being heard. • There’s no such thing as a small job or a small client. • They say the client is always right. If they’re not, help them realize it themselves. • When searching for a solution, never ignore the obvious but always watch for the unexpected. • Look for ideas that have legs. Those are the only ones that can take you places. • A good idea always has more than one execution?. • The consumer has a brain and a heart. Learn to communicate with both. • You are only as good as the people you hire. • You can only grow by nourishing growth. • Always give credit where credit is due. Never try to appropriate other people’s ideas. • Don’t punish your people for their weaknesses. Help them build confidence by recognizing their strengths. • Encourage teamwork. Isolation only results in frustration and poor performance. • My people say I always have a solution at hand. Those solutions usually originate from their own ideas. • Awards should only be a result of good, effective work. • Your ultimate goal should be to impress your consumer. Not your boss.

Where were you born and where do you live now? Bogota, Colombia / Chatham NJ

A design hero of the past 100 years? Herb Lubalin

If you were not pursuing your current career, what would you do or be?  Photographer