A new report by the Center for an Urban Future documents the growing economic importance of the arts and the broader creative sector to New York City. The report reveals that while traditional economic drivers like finance and legal services have stagnated in recent years, employment in film and tv production soared by 53 percent over the past decade, while architecture, performing arts, advertising, visual arts and graphic design are outpacing the city’s overall employment growth of 12 percent. 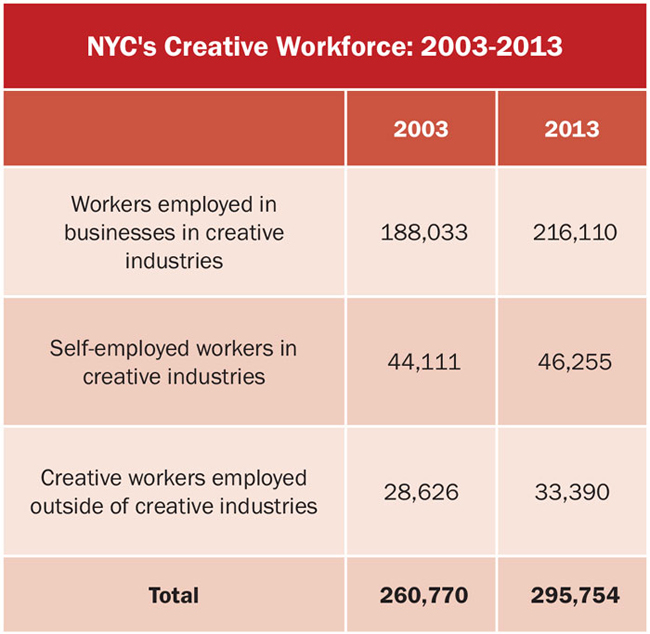 Overall, the June 2015 Creative New York Report shows that New York City’s creative sector in 2013 employed 295,755 people, seven percent of all jobs in the city and a significant jump from 2003. However, the report also finds that the city’s working artists, nonprofit arts organizations and for profit creative businesses are experiencing intense challenges, and that New York faces growing threats from a number of cities — from Shanghai and Berlin to Portland and Detroit — that are aggressively cultivating their creative economies. According to Executive Director Jonathan Bowles, the study concludes that while the tech sector has grown more rapidly in recent years, and industries such as health care have more jobs overall, the creative sector arguably provides New York with its greatest competitive advantage. It shows that in 2013, New York City was home to 8.6 percent of all creative sector jobs in the nation, up from 7.1 percent in 2003. 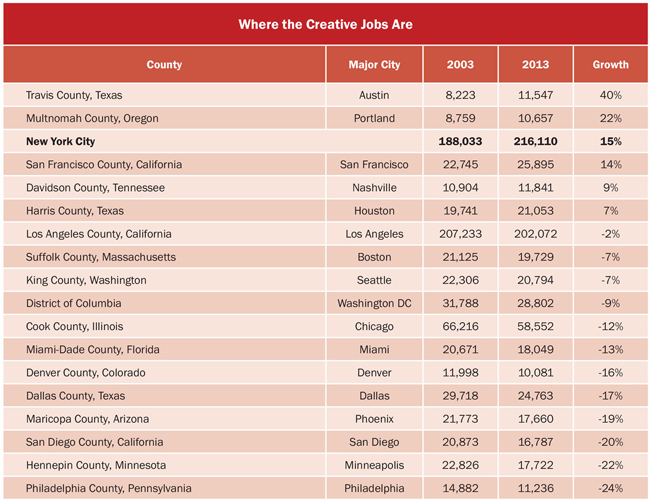 The report, funded by the New York Community Trust, Robert Sterling Clark Foundation, Laurie M. Tisch Illumination Fund, Rockefeller Brothers Fund and Edelman, takes a close look at what has changed in the city’s creative landscape over the past decade. Among other things, it shows that most of the recent growth in the city’s creative economy is occurring outside of Manhattan, notably in Brooklyn and Queens.  Among the threats to the creative sector identified by the report: real estate pressures, mounting student debt, the prevalence of unpaid internships in creative fields, declining government support for the arts, inadequate diversity in much of the creative sector and financial pressures facing small and mid-sized arts organizations. It culminates with 20 recommendations for strengthening the creative sector.