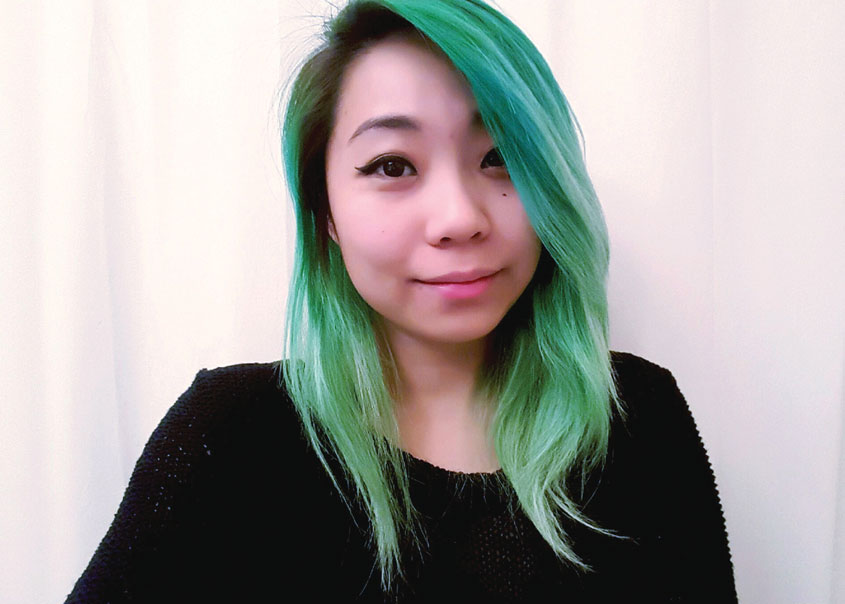 Stephanie Quan is a graduating senior at California College of the Arts studying Graphic Design. She believes that life is too short to pursue one thing, which is why she chose a profession that has a wide lens to gain fresh insight. Ideally, she would like to design for the music industry, as it has always been a passion of hers to connect with people in a creative way. She enjoys translating sounds into communicating visuals, experimenting with different mediums, and trying new things. When it comes to her work, Stephanie is influenced by the busy lifestyle of the city, sound visuals, subcultures, and of course, music.

WHERE WERE YOU BORN AND WHERE DO YOU LIVE NOW?
I was born in Torrance CA. Currently, I am residing in Oakland.

FICTIONAL OR HISTORICAL CHARACTER YOU’VE ALWAYS IDENTIFIED WITH?
None that I can put a finger on.

ANY PETS?
A dog named Banksy. ]

WHAT LANGUAGES ARE YOU FLUENT IN?
English and Cantonese

FAVORITE CHARITY?
I currently don’t have one at the moment.

LAST COMPLIMENT YOU GOT?
“Nice hair.”

DO YOU COLLECT ANYTHING?
Ticket stubs & bottle caps

COLOR USED MOST OFTEN IN YOUR DESIGN?
Black, white, grey, and a dash of neon colors

GREATEST STRENGTH/WEAKNESS AS A DESIGNER?
As a designer, my greatest strength is being able to generate ideas quickly. My greatest weakness is that I can get stuck on ideas, which makes it difficult to conclude to a solid execution.

IF YOU WERE NOT A DESIGNER, WHAT WOULD YOU BE?
If I was musically inclined, a music producer.

A MANTRA OR SAYING YOU LIVE BY?
I live my life a quarter mile at a time. ‑ Dom Toretto in The Fast and the Furious