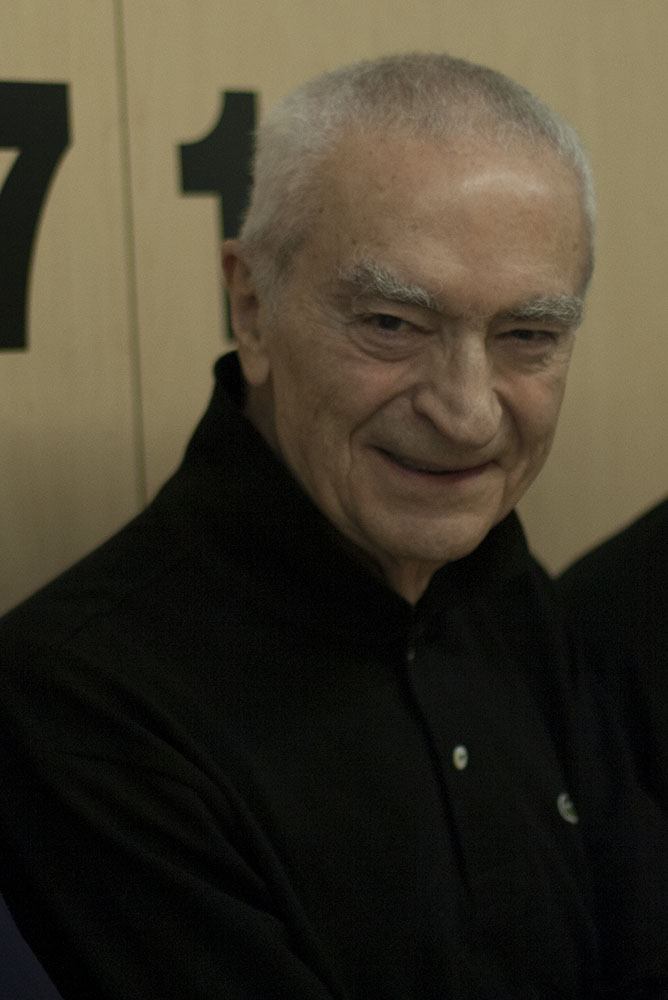 “Styles come and go. Good design is a language, not a style.” That quote by Massimo Vignelli elegantly summed up his philosophy of design — and, by the way, what did he do that was not elegantly done?

Mr. Vignelli died yesterday at the age of 83 after a long illness. Born in Milan and trained as an architect in Milan and Venice, he was an admirer of Le Corbusier and Mies van der Rohe, and spent a lifetime translating the concept of “functional beauty” into everything he designed. He was the leading “modernist” graphic designer, striving for disciplined, intelligent and simplified solutions based on timeless geometric forms. A biography accompanying the presentation of the AIGA Medal to he and his wife states:  “Vignelli design, in both three dimensions and two, is highly architectural in character. Massimo’s posters, publications and graphic designs seem to be built in stories, separated by the now-familiar, bold, horizontal rules. Basic geometry is respected. The investigative design process moves from the inside out: ‘The correct shape is the shape of the object’s meaning.’ The Vignelli commitment to the correctness of a design has taken their work beyond the mechanical exercise of devising a form best suited to a given function. They’ve always understood that design itself, in the abstract, could and should be an integral part of function.”

His clients are too numerous to enumerate but included American Airlines, IBM, Knoll, Ford, Xerox, Bloomingdale’s Saks, Barneys, the National Parks Service, and the New York and Washington DC subway systems. Mr. Vignelli first came to the U.S. in the 1950s on a fellowship and returned permanently in the mid-1960s as a co-founder of Unimark International, which grew into an influential global pioneer in the creation of corporate identities through design. He headed the New York office of Unimark and then later opened Vignelli Associates, with his wife Lella. The firm eventually morphed into Vignelli Designs in 1978. Mr. Vignelli was honored with every major design award, including a Lifetime Achievement Award from the Cooper-Hewitt, National Museum of Design, and the first US Presidential Design Award, presented by Ronald Reagan, for work with the National Parks Service. His graphic, product, furniture, industrial and environmental designs appear in permanent collections worldwide such as the Museum of Modern Art, the Metropolitan Museum of Art, and the Smithsonian.

On a personal basis, Mr. Vignelli and the GDUSA family crossed paths over the years. My father, Milton Kaye, was publisher of Print magazine through the early 1960s, and Mr. Vignelli consulted on the design of a spin-off magazine for package designers — even visiting our little subdivision house on Long Island when I was roughly eight years old. In the mid-1960s, once my father founded GDUSA, the publication was a close friend and supporter of Unimark and vice versa. Over the years as editor of GDUSA, I occasionally ran into Mr. Vignelli and he kindly participated in several of our trend forecasts. The final time I saw him, a few months ago, he surprised me by graciously remembering that we had first met when I was a small child in pajamas (to make that clear, I was the one in pajamas). Interestingly, he asked after my parents, and wondered aloud if they were still alive. In GDUSA’s recent 50th Anniversary reader poll, Mr. Vignelli was named by our readers as one of the top five designers of the era and his still-controversial New York City Subway Map (circa 1972) was ranked as one of the top three favorite design projects of all time.