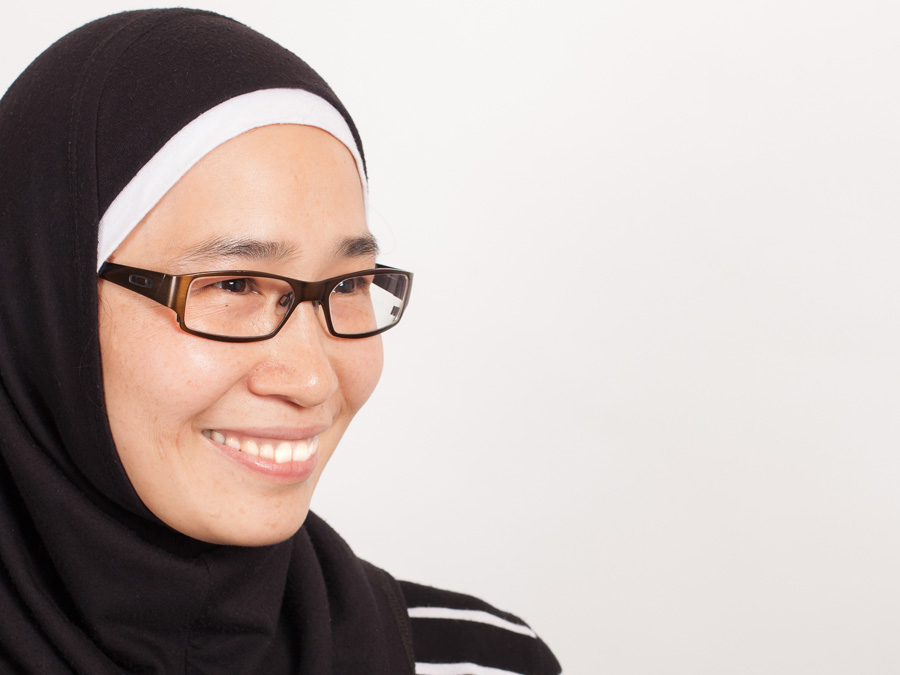 Pik is the creative head at the studio of KUNG PIK LIU. Her interest in design goes back to her childhood in Hong Kong. She always had a talent for organizing information and making “stuff” look better. As a result, classmates and teachers approached her for help with design projects. In high school a teacher even suggested she become a graphic designer. Not knowing what that was, she asked, and instantly knew what she wanted to be when she grew up. She left the comfort of her home to pursue her dreams in NYC. In addition to the great resources at the Fashion Institute of Technology (FIT), she took advantage of the world-class cultural attractions, and met people from around the world. It was in NYC where she met Muslims, learned about Islam, and eventually accepted this faith as her own in 2001. Just as the skills of design brought order her physical world, Islam brought order to her spiritual world.

On the morning of September 11, 2001, she found herself in a subway under the World Trade Center as it was being attacked. Finding herself in this city she loved, attacked by a faith she loved, she knew she wanted to be part of the solution. Pik has dedicated her talents to serve as a bridge of intercultural and interfaith understanding. Today, Pik focuses her attention on designing publications for the Islamic Economy. She pulls on her global perspective, understanding of Islamic culture, and her design sensibility to inform her work. Expanding on her passion for design and multiculturalism, she partnered with her husband and cofounded Sakina Design, a producer and retailer of contemporary Islamic home decorations and gifts. There she melded the best of traditional Islamic designs and modern minimalism. Her next project? Pik wants to give the Qur’an a facelift for its modern multicultural audience.

WHERE OR HOW DO YOU FIND INSPIRATION FOR YOUR DESIGN WORK?
Everywhere and anywhere. I love skimming magazines and books. Binge surfing the web is also a great place to find ideas. Chatting with friends and family can also inspire my creativity. I’ve even found inspiration in conversations with my daughter — kids are so creative and insightful!

HOW DOES WHERE YOU WERE BORN, GREW UP OR LIVE NOW AFFECT YOUR DESIGN SENSIBILITY OR STYLE?
I was born and raised in Hong Kong, and came to the States when I was 19. Since then, I’ve lived in NYC, New Jersey, Washington DC, St. Louis, Southern California, and Upstate New York. Currently, I’m back in Southern California, in a suburb of Los Angeles. Being raised in a different culture and living in different parts of the country (from rural to suburban and urban) has made me more open-minded. I can see the world from different perspectives, and I’m open to learning about new things, new opportunities and new possibilities.

FAVORITE BOOKS?
Outliers by Malcolm Gladwell
The Purification of the Soul by Ahmad Farid

GREATEST STRENGTH/WEAKNESS AS A DESIGNER?
Strength: organized
Weakness: too agreeable

ADVICE TO A YOUNG DESIGNER JUST STARTING OUT?
“Do or do not, there is no try.” – Yoda

IF NOT A DESIGNER, WHAT WOULD YOU BE?
A chef

A MANTRA OR SAYING YOU LIVE BY?
Less is more