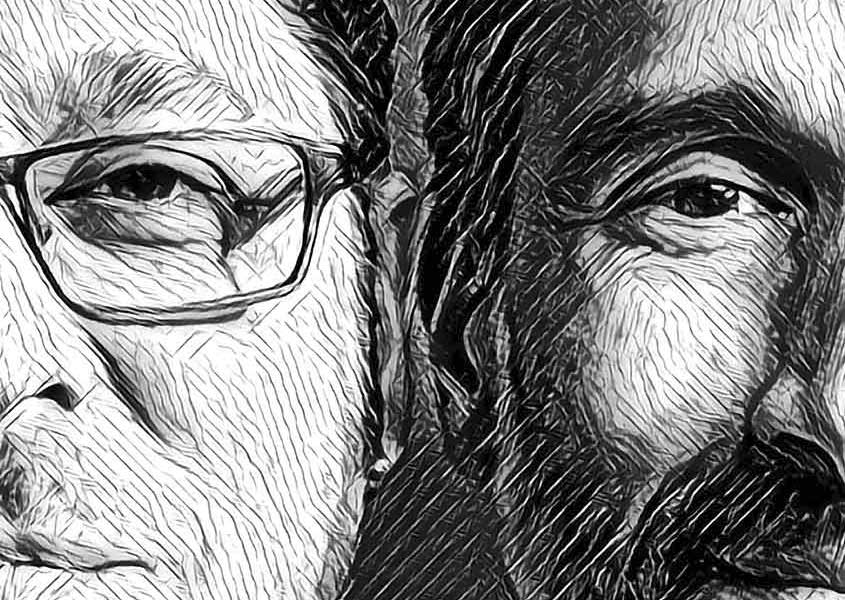 In 2002, Bill Skrief and Todd Reinhart launched the multi-media design firm DeadLizard. They’ve worked together in some fashion since 1995. Before meeting in NYC, they had even attended the same Illustration program at Syracuse University! As DeadLizard has grown over the years, they’ve collaborated with the sales and marketing teams of many broadcast industry staples, including ABC, NBC Universal, Disney, The Weather Channel, Oxygen, Fox News and The Hallmark Channel. Bill Skrief has been drawing, painting, designing, and generally creating since he can remember. After he graduated in ’94 he began sharpening his design chops at a NYC design studio where clients included IBM, British Airways and Hilton International. He’s always been thankful that he’s never had to work a day in his life, doing what he loves. Todd Reinhart burst onto the creative stage early, having used his mother’s lipstick on the family German shepherd for his first body painting exhibition at age 3. He has spent his professional career cultivating his skills in various Creative/ Entrepreneurial capacities around NYC & Brooklyn, forever chasing the creative fulfillment of his early days in the Canine Decorative Arts.

WHERE WERE YOU BORN? WHERE DO YOU LIVE NOW?
Born in balmy Portland ME. Lived there a few months, and then moved to eight different states before finally getting into college. Currently, staying put in New Jersey.

DID YOU GO TO DESIGN SCHOOL?
Received my BFA in Illustration from Syracuse University with a concentration in Advertising Design.

LEFTY OR RIGHTY?
Righty, but been known to sketch lefty and upside down

MORNING PERSON OR NIGHT OWL?
Was a night owl, but then had kids. Found it way easier to wake ridiculously early and stay focused on work.

ARE YOU MUSICAL AND/OR DO YOU PLAY AN INSTRUMENT?
Played the alto sax for years and sang in a multitude of choral groups. Right now, playing with Guitar Smith on the Xbox to learn enough to start my own band.

WHAT WAS YOUR FAVORITE CHILDHOOD TV SHOW?
Battlestar Galactica

LAST BOOK YOU READ?
There’s No Such Thing as a Dragon by Jack Kent

ANY PETS?
Not yet, but I’m seeing a family dog in the near future

WHAT’S THE LAST COMPLIMENT YOU GOT?
You make the best chocolate chip pancakes!

DO YOU COLLECT ANYTHING?
I like to adorn my office with Kidrobot Dunnies. I’ve also painted a few Munnies for my kids.

COLOR USED MOST OFTEN IN YOUR DESIGN?
Truly depends on the brands that I’m working with and what best reflects their personality.

DO YOU HAVE A DESIGN MENTOR OR INSPIRATION?
Guerrilla Street Art in general

GREATEST STRENGTH/WEAKNESS AS A DESIGNER?
I love the creative process and executing on a vision. However, I sometimes need to step back … which is really hard.

ADVICE TO A YOUNG DESIGNER JUST STARTING OUT?
It’s not just what you know, but who you know. Get out there, meet people, share ideas, and open as many doors as possible.

IF YOU WERE NOT A DESIGNER, WHAT WOULD YOU BE?
Honestly, I have no idea.

A MANTRA OR SAYING YOU LIVE BY?
Keep moving forward.

WHERE WERE YOU BORN? WHERE DO YOU LIVE NOW?
Born in the bustling metropolis that is Wilmington DE. After moving to Brooklyn post-graduation, got spoiled for living anywhere else. Fuggedhaboutit!

DID YOU GO TO DESIGN SCHOOL?
I also received my BFA in Illustration from Syracuse University, but with a concentration in fine arts painting/life drawing.

MORNING PERSON OR NIGHT OWL?
Definitely a morning person, and seem to be getting more that way the older I get!

FICTIONAL OR HISTORICAL CHARACTER YOU’VE ALWAYS IDENTIFIED WITH?
Depending on the day, either Sisyphus or Hercules

ARE YOU MUSICAL AND/OR DO YOU PLAY AN INSTRUMENT?
Played the flute in grammar school. Second chair, baby!!

WHAT WAS YOUR FAVORITE CHILDHOOD TV SHOW?
Any PBS show with David Attenborough

ANY PETS?
Only my Peeves, which absolutely refuse to let me be

WHAT LANGUAGES ARE YOU FLUENT IN?
English and Unintentional Irony

WHAT’S THE LAST COMPLIMENT YOU GOT?
Really nice hair cut!

DO YOU COLLECT ANYTHING?
Compliments on my hair cut.

COLOR USED MOST OFTEN IN YOUR DESIGN?
I do likes me the Greens

DO YOU HAVE A DESIGN MENTOR OR INSPIRATION?
Life

GREATEST STRENGTH/WEAKNESS AS A DESIGNER?
Perfectionism

ADVICE TO A YOUNG DESIGNER JUST STARTING OUT?
Be passionate, wildly creative, and take risks. No artist ever made their way playing it safe.

IF YOU WERE NOT A DESIGNER, WHAT WOULD YOU BE?
Trapped in a non-creative Groundhog Day-like nightmare.

A MANTRA OR SAYING YOU LIVE BY?
Good enough is never, ever, good enough.