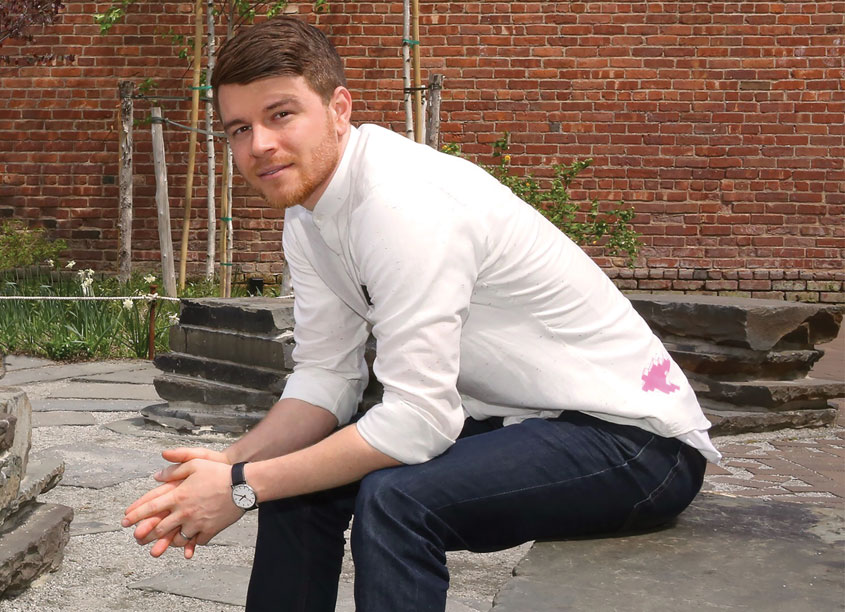 Chris has been the force behind L+R’s designs for the past two years. After focusing on packaging and brand design in Los Angeles, he made the move to join L+R’s team in Brooklyn where he has translated his understanding of the analog to the digital product world. Chris believes his background in print brings a more expressive vantage point to the digital branding he executes. He is the first to recognize his deficit in the attention department, and he believes his shifting attention is what gives him to opportunity to constantly try new things. On a never ending path to having “no style,” even as a kid he knew it was time to change things up whenever anyone was able to define him or his work. This is the mindset he brings L+R’s team, helping clients like Amazon, Disney, Google, GE, and Global Citizen stand out, and merging his favorite designer Saul Bass’ motto “I want to make beautiful things” with functionality and the needs of the audience.

WHERE WERE YOU BORN AND WHERE DO YOU LIVE NOW?
Born and raised in the Bay Area and am now living in NYC

DID YOU GO TO DESIGN SCHOOL?
Nope, but I was surrounded by small group of great talent at CSUN’s art department

ARE YOU MUSICAL AND/OR DO YOU PLAY AN INSTRUMENT?
Yes-ish, I played the guitar for 9 years or so and then one day just stopped

FAVORITE BOOK?
1984 began a long history of distrusting the authorities

FAVORITE MOVIE?
Too many. I will say that heist/suspense movies really do it for me though

FAVORITE FREE TIME ACTIVITY?
Getting outdoors. In the past it’s been hiking/ bouldering, nature has always helped center me. Being in New York has been a challenge in that area. But second to that is good food with good friends, which New York is perfect for.

COLLECT ANYTHING?
I’m the opposite of a collector. My dad is a collector so in reaction I enjoy throwing things away instead.

COLOR USED MOST OFTEN IN YOUR DESIGN?
I’ve been told it’s yellow

TYPEFACE USED MOST OFTEN IN YOUR DESIGN?
I go through phases but…when in doubt, DIN

DOES PRINT HAVE A ROLE IN YOUR DESIGNS?
Not as often anymore, since making the move to a digital agency. But occasionally we do work with print for internal projects or for larger scale branding projects.

GREATEST STRENGTH/WEAKNESS AS A DESIGNER?
Planning out a project so large in my head and having to fight the accompanying feelings of paralysis

ADVICE TO A YOUNG DESIGNER JUST STARTING OUT?
Surround yourself with people who share your passion and push each other to be better. Encourage each other; advise each other; compete with each other; etc. The right environment is so important.

A MANTRA OR SAYING YOU LIVE BY?
Pessimism leads to weakness, optimism to power