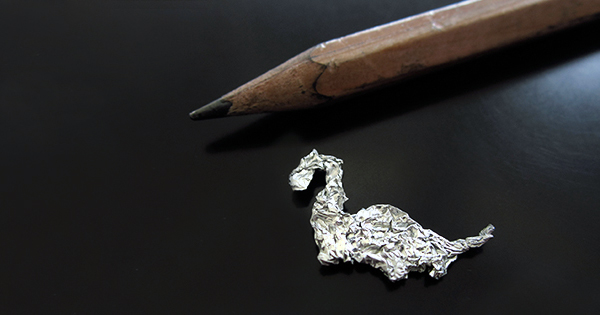 Upon reading the Welcome Letter entitled “Intelligence Made Visual,” by Gordon Kaye, Publisher of GDUSA, in the 50th Anniversary of the American Graphic Design Awards, which I am published in, I was inspired to write this blog entry which I hope will inspire other young designers.

During the long, seven-hour drive home from college for winter break last year, I finally realized, after months of agonizing over the issue, what would be the perfect choice for my personal brand logo. When I walked into my house I immediately went searching for my childhood creation in the back of one of our kitchen cabinets – where my mother stored my creation for safe keeping– but it was missing! How could something we kept in the same box, in the exact same spot, for 20 years, go missing?! In that moment I felt one of the deepest pangs of panic and sadness, which sent my entire family into absolute chaos.

After a few hours of frantically searching as if somebody’s child went missing, and through the use of some Sherlock Holmes-like detective skills, we discovered that my Dad had moved my little creation to our bank’s safety deposit box (the obvious place, of course!). Because it was a Sunday, I had to wait an entire day, which felt like an eternity, to go and see if it indeed was still there.

The next day we drove to the bank and watched with baited breath as the bank clerk spun open the giant iron door, climbed the ladder, and brought down our safety deposit box. I took a deep breath before looking to see if it was there, and to my relief, there was another little box inside. Inside that box was my creation – my little tinfoil dinosaur.

Like most kids, I was obsessed with Dinosaurs. To capture my attention, entertain, or distract me, my mother would often make dinosaurs out of napkins for me to play with. This must have had an effect on me because when I was three years old, I crafted a tiny brontosaurus dinosaur out of my lunch sandwich tinfoil the size of a penny. When I brought it home my parents saw it as the first sign of creativity in me and have been encouraging me ever since.

After 50 years, Gordon Kaye came to the conclusion that “great design is not about a particular style or period or prettifying the surface of things. Instead, it is about the challenge of making information and culture and values – the core of the thing – visible, understandable, aesthetic.”

As a young Graphic Designer with a fresh BFA Design degree from Florida State University, I have often struggled with how to objectively place value on myself through the pricing of my services. At times it has been even more challenging to explain to people the value of design when they tend to undervalue it so much. There are numerous times when others and myself hear, “Oh, you’re a designer? Is there really a market for that? Don’t you just make pretty pictures?” Or this one, which is my favorite, “Can you make me a logo for $50? That shouldn’t take more than a few hours.”

Can designers make pretty pictures, and can they make logos for $50? From personal experience, I can answer yes to both of these questions. However, the above statements are, at best dismissive and demonstrate an elementary level of understanding of how the graphic design profession is valued, whether the client is aware of it or not. For example, would these same individuals tell a professional speaker that all they do is just “talk?” Would one tell a programmer that they just “play around with numbers?” Or would you tell a writer that they just “jot some words down?” What then is really the best way to explain to somebody what a Graphic Designer does?

I need not look any further than Gordon’s simple and poignant definition borne out of his 50 year assessment – “graphic design at it’s best is intelligence made visual.”

Gordon expounds upon this by explaining that designers are “willing to step up to the challenge of finding, revealing, communicating the kernel of truth in a product, a brand, a company, a cause. To have the discipline to make information and intelligence visible for each new era.” Like every profession I mentioned above as well as many others, the common denominator is intelligence. With our intelligence, others entrust us with the enormous responsibility of taking incredibly complex concepts and boiling them down to their essence, in order to communicate a simple, crystal clear message.

That is no easy task.

The profession of a designer carries with it an immeasurable amount of worth. Take a look around you. Everything your eyes can digest had to be designed with intelligence.

I remember as if it was yesterday, attending my first HOW Design Live conference in San Francisco. In a session entitled “Advanced Proposal and Pricing Strategies,” by Emily Cohen, the renowned Graphic Design Consultant, my view of myself, Daniel Ackerman, the graphic design professional, completely changed. Cohen’s wisdom was mind-blowing. She dissected various concepts and strategies for fee structures versus design investments, being a freelancer versus being a businessman, vendor versus professional, as well as issues involving client proposals, negotiating, and confidence, just to name a few. Cohen was throwing around all sorts of numbers for logo fees and design charges that had my head spinning. And then she dropped a bombshell on me when she said, “Or you can just be a sucker and charge $500 for a logo.”

Five-hundred dollars? I had never charged even half that much. At that very moment, I began to question my entire existence by realizing that I wasn’t a sucker. I was an absolute moron!

It is important to note though that when pricing your services, it is not about charging more than you should, rather knowing your worth an being confident about it. When you take yourself seriously, other people will take you seriously. The issue though is that artists often fall into the trap of undervaluing themselves. This is the reason I was so shocked with what Emily Cohen said because I was forced to come face to face with this unsettling realization, which leads me to my next point about valuing the process.

If you think what a designer does is defined by the confines of time and space, you are wrong. I had this realization after receiving my second series of awards, which culminated in the reading of Gordon Kaye’s Welcome Letter in the GDUSA 50th Aniversary magazine. My winning logo from last year was conceptualized in a singular sketch. It was an instant winner and I viscerally felt it.

This year, my personal brand dinosaur logo was selected for an award. However, that dinosaur logo took me almost two months and hundreds of graphic variations to create the perfect graphic representation of who I am and who I want to become as a designer, and was based off its tinfoil counterpart.

Being a graphic designer is about having the ability to create timeless value. Our challenge as designers is to get our clients to understand that, and ultimately deliver it to them. Sometimes the great idea comes to you right away in its final form, and sometimes it takes a lot longer to flesh it out. Regardless, neither path negates or diminishes the other in any way, shape, or form because the finished product should embody (what I see as) Kaye’s brilliant mantra that “graphic design at its best is intelligence made visual.”

In my case, I was lucky enough to come to Kaye’s realization early on in my career. When one looks at design through the lens of timelessness rooted in intelligence and makes this the true standard, you too might flip out if you realized that a piece of who you are, your tinfoil dinosaur, went missing. Would you value that at more than $50? My money says we all would.