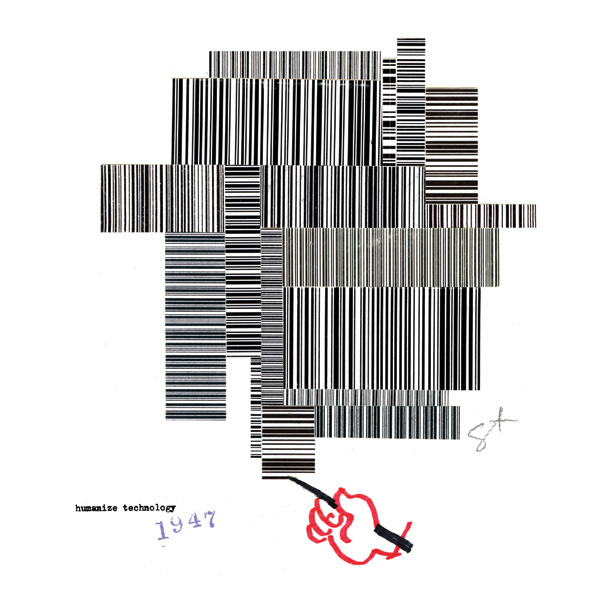 In a recent enewsletter GDUSA publisher Gordon Kaye suggested that graphic design trends in diverse areas such as print design, logo design and use of color had become too influenced by digital technology and that designers may begin to embrace more traditional and artisanal approaches. He also noted, in part, that “our 51st Anniversary Print Design Survey reveals a sense among designers that the pendulum has swung too far from print communications” and the element of touch and physicality is being lost in the “digital clutter”. We were greatly honored when design legend George Tscherny  found these comments to resonate and added his own simple but profound message:

too many buttons
too many apps
too much twitter

Mr. Tscherny included his design for the AIGA Centennial in which AIGA invited 100 designers to pick a year from the last century to illustrate. George Tscherny picked 1947 and selected to illustrate the barcode which was developed in 1947/1948 and patented in the early 1950s. The design evokes his plea to “humanize technology,” which Mr. Tscherny explains is not a plea for robots but “rather of thoughts recollected in tranquility* amid all the digital clutter.” We couldn’t agree more!

* “Poetry is the spontaneous overflow of powerful feelings: it takes its origin from emotion recollected in tranquility.” -William Wordsworth, Lyrical Ballads