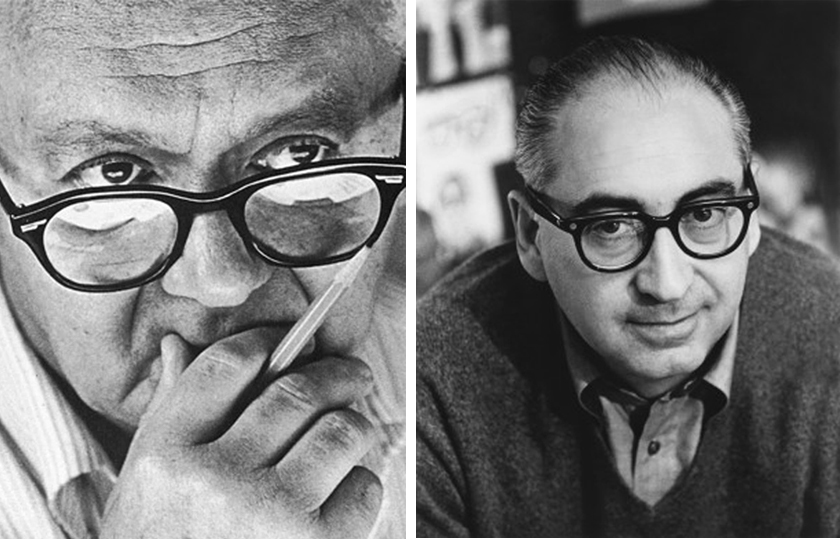 Guest Blogpost by Kevin Hall, principal of Kevin Hall Design, an award-winning graphic design firm near New Haven CT. Hall has been recognized nationally for his work in logo design and branding, and has great respect for design history.

This year will mark the 20th Anniversary of the passing of two of the world’s most famous graphic designers, Paul Rand and Saul Bass. To mark this occasion, I wanted to take this time to pay tribute to both men for their accomplishments to the graphic design industry. To me they almost seem somewhat linked. Both were originally from New York, however Rand would choose to live and work on the East Coast, whereas Bass would choose the West Coast. But what would make them similar is that over the years both men would leave an indelible mark on the field of graphic design and elevate our profession as we know it today.

Saul Bass was a graphic designer, title designer and film director. I had the good fortune to meet him in June 1985 at the International Design Conference in Aspen, CO. He was standing next to Ivan Chermayeff at the time, so I was among graphic design royalty. I introduced myself to Saul, knowing that I would probably never have this opportunity to meet him again. He was very approachable and friendly, wearing a tan-colored cowboy hat.

At that moment I could have asked Saul Bass hundreds of questions, but not to take up too much of his time, I asked him only one: of all the well-known logos and trademarks you have designed over the years, which one is your favorite? Without any hesitation in his voice he said to me, “Kevin, all the logos I have designed are like my children, they are all my favorites.” Although I was looking for Saul Bass to reveal to me his all-time favorite logo, his answer seemed honest and sincere. To this day, I have never forgotten his words and the memory of meeting with him will last a lifetime.

Paul Rand was a graphic designer, illustrator, educator and author. He could do it all, and then some. How amazing is it that Rand’s logos for IBM, ABC, Westinghouse, Cummins Engine and so many others are still being used today and still look fresh and modern. His corporate identity work shows ingenuity and timelessness. Rand was an American Modernist with the vision to design logos that were memorable and enduring. Some of Paul Rand’s most notable quotes were “Don’t try to be original; just try to be good” and  “Design is so simple, that’s why it’s so complicated.”

While attending the Rochester Institute of Technology in the mid ’70’s, we learned about Paul Rand, Saul Bass and other noteworthy designers of that time period. These designers became our heroes and we looked up to them. I can remember somehow getting ahold of the entire collection of the Saul Bass designed AT&T Corporate Identity Manuals and for a young designer this was equivalent to having just won the lottery.

I never had the privilege of meeting Paul Rand, but have read many of his books and have followed his graphic design teachings and methodology. I would encourage all young graphic design students and those currently in the profession to take the time to study the work and teachings of both Paul Rand and Saul Bass and to remember these two men for all they contributed to the graphic design profession.