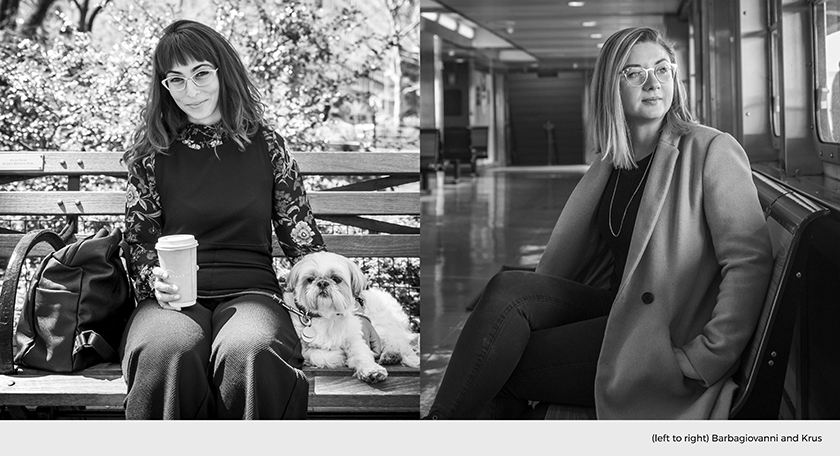 New York-based brand design studio ThoughtMatter has named Wednesday Krus and newcomer Samantha Barbagiovanni as Design Directors. Krus and Barbagiovanni are helping to lead the already predominantly female design team at ThoughtMatter, a rarity for the creative industry. “When we say we want to be a different kind of agency, this is what we mean – we’re concerned not only with having the right talent, but having people from diverse backgrounds and with different perspectives in the room,” says Managing Director Jessie McGuire. “That’s how you get the best results; solutions that reflect the diverse world we live in.”

Originally joining ThoughtMatter as a designer, Krus’ flexibility and empathy helped her rise to a leadership position. She was a driving force behind the studio’s branding work for Staten Island, a radical redesign of the Constitution covered by Fast Company. More recently, she spearheaded the launch for direct-to-consumer clean beauty brand Ivy & Elder. In her new role, Krus takes on a host of leadership responsibilities, helping to mentor and guide design talent as well as manage project workflows in collaboration with Account Manager Katie Williams to plan budgets and timelines. To Krus, the position represents a major achievement in her career goal. “When you see some of the statistics about women in senior leadership roles in the design industry, it’s easy to become disheartened,” she confesses. “So knowing that the studio has trust in me is vital and demonstrates a growing desire for change, not just with clients but within our own agency as well.”

Barbagiovanni joins from design agency Elmwood where she worked with former Elmwood Creative Director Ben Greengrass, now at ThoughtMatter. Over her career she has earned various accolades, including a Mobius Award for coffee brand Alterra, as well as a GDUSA American Package Design Award and a Dieline Award for her work for online retailer Jet.com. Now, as Design Director, she will collaborate across account and strategy teams. Early projects for ThoughtMatter include designing the digital hub for literacy and job skills nonprofit The Harlem Empowerment Project and the neighborhood branding for Long Island City NYC.“What I love about ThoughtMatter is that everyone approaches projects from different angles and perspectives,” says Barbagiovanni.

Studio officials believe that these appointments reflect a shift in the larger culture. “These are different times,” affirms McGuire. “Now more than ever, leaders of women’s organizations and key clients, as well as company board members, are women. More stories are being told from real women’s points of view while, at the same time, fights for women’s rights, pay parity and more are dominating the cultural conversation. In this climate, companies demand that their partners have senior leaders who can speak to these experiences in authentic ways.” Adds Greengrass: “These are designers who aren’t afraid to challenge the status quo, with creativity and craft to spare. Of course, it’s about hiring the best, whatever the gender. Diversity for diversity’s sake is never the intention. But it’s always important to have the right team and the right people to guide it. It’s clear that Sam and Wednesday both hold qualities that make them contenders as female Creative Directors of the future.”