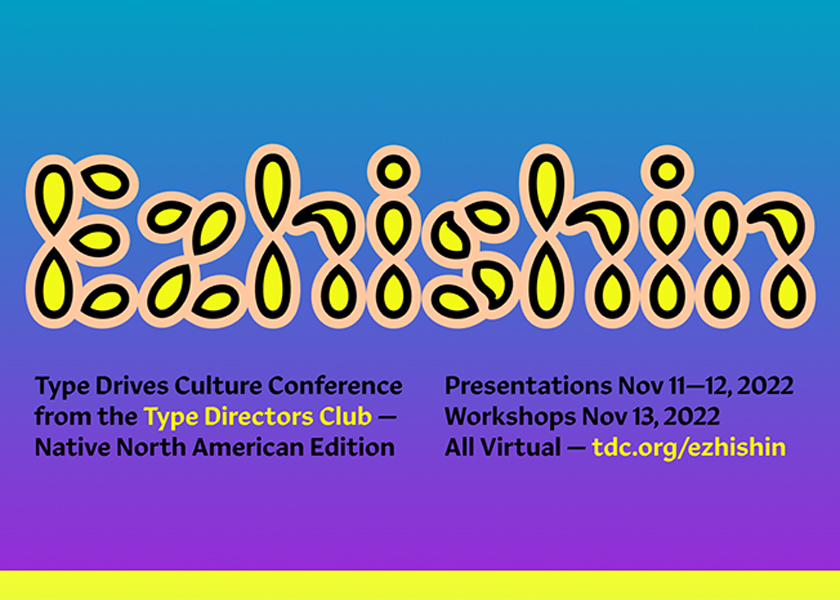 The Type Directors Club will host Ezhishin, the first-ever conference dedicated to Native North American typography this fall. Named after the Ojibwe word for “s/he leaves a mark,” Ezhishin was developed to facilitate conversation around the typographic needs of First Nations/Native American communities, and showcase lettering projects and typographic styles by Native designers. The virtual event includes more than a dozen panels and presentations on November 11-12, 2022 with workshops on November 13.

“This conference is an example of what a positive partnership to uplift diverse communities looks like,” Southall said. “The work of Native designers has frequently been left out of conversations in the mainstream and not adequately addressed in design history. We want to change that situation. The word ezhishin serves as a poetic title for a conference focused on the mark-making typographers, as well as the legacy we leave as designers.”

Ezhishin’s distinctive logo, developed by type designer and Tulsey Type founder Chris Skillern, is inspired by Cherokee beadwork. With a mind towards Native cultural revitalization and self-determination, Skillern echoed the organic, curvilinear shapes found in Cherokee beadwork to create this custom font lettering in three weights along a variable type axis, which can also be layered.  The font is brought to life on the website via coding provided by Eric Jacobsen. Ezhishin branding was collaboratively designed by Samarskaya and Southall, inspired by the bright colors of beadwork, powwow regalia, and ribbon skirts.

To register for this first-of-its-kind conference, please visit the Ezhishin website.