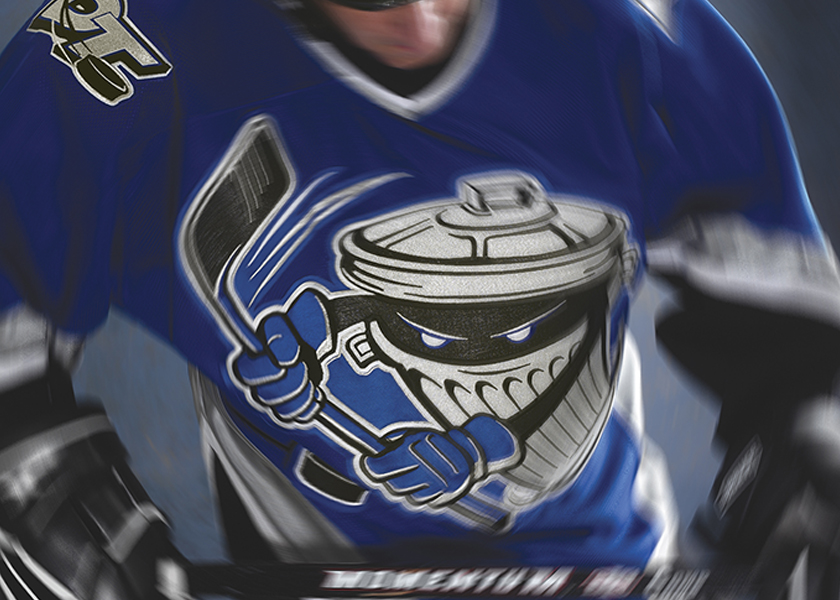 Alessandro/Weber Design (AW or A/W Design for short) is a strategic branding firm in New York City. Recently, a logo that we designed 17 years ago for a minor league hockey team, The Danbury Trashers is having a second life. On August 31st, Netflix released a documentary titled ‘Crimes & Penalties’ as part of its ‘Untold’ sports documentary series. It is the story of a trash magnate father, with alleged mob ties, who buys a minor league hockey team for his 17 year old son to manage. Then several days after the Netflix release, rap star Drake posted photos wearing the team’s hockey jersey and the logo has become somewhat of a new pop icon.

The team launched in 2004 about the same time I started playing hockey in an adult league at our local rink in Danbury CT. I quickly became obsessed with the the sport. One day, there was an article in the local newspaper announcing a new professional team called the Danbury Trashers owned by Jim Galante. There was a press conference scheduled in a few days to announce the details. I thought how great it would be to design a team logo, combining design with my new passion for hockey. I have a long train ride into the city from Connecticut. My time on the train is very productive because it is pure quiet time when I can sketch, write proposals and compose emails. On my way into the city that day I sketched out a logo. When I arrived to the office, I spoke to everyone about the article and showed them my sketch. 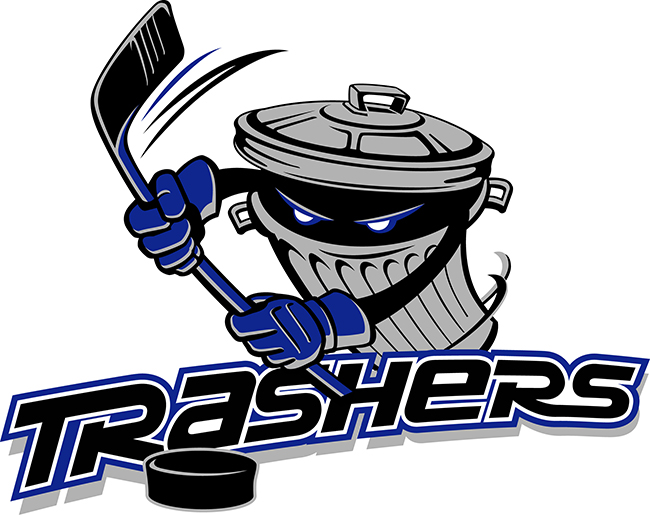 Our client manager at the time, was enthusiastic and said ‘we have to send it to them’. I said, ‘Well that’s not how we normally work. Clients usually hire us first, we develop an exploratory, they choose several to refine…”. The design exploratory is the heart of what we do. Our main point of difference is the fact that my business partner, Kris Weber and I are both designers so our passion for design becomes an asset to brand owners who want to see all of the possibilities for their brand. Our client manager pushed me further to send them just one sketch. There was already a press conference scheduled in a few days so I thought it was a futile effort. We had a very talented illustrator working with us at the time, Michael Blank. We whipped up a refined sketch and FedExed it to the team. The next day Jim Galante called us and said “I love this logo. I want it, how much?” The team already had a logo and the jerseys were in production. They literally stopped the presses for our one sketch.
. 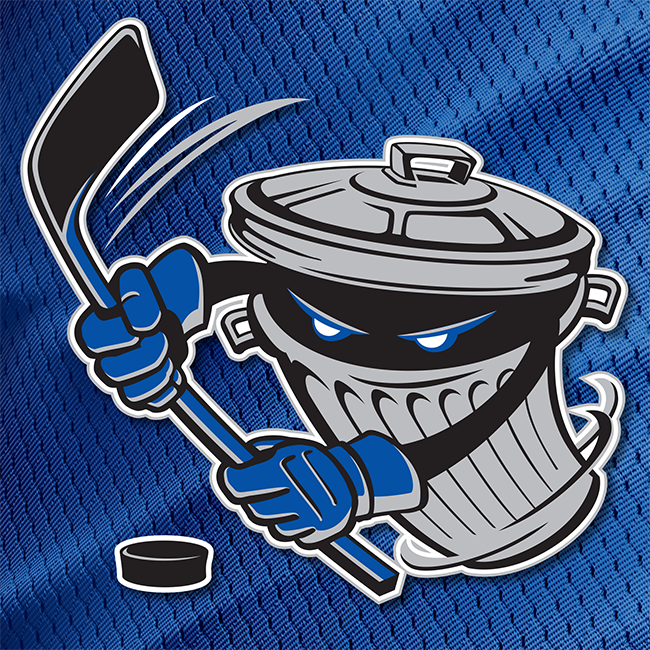 .
We all know some clients can bemore difficult than others so you would think ‘designing for the mob’ would betough but it was the opposite. I do have some great stories about working with them. Some are scenes right out of ‘Good Fellas’. But I have to say, the owner Jim Galante was a skilled business man – decisive, focused, quick to execute ideas. They built the team from the ground up and he was involved in all of the details. He realized that the logo and branding was important. We had conversations about how the logo and branding “needed to look mean but not scary” because a big part of the market was going to be kids. We had one design refinement round where we just studied the eyes of the character. We even picked Pantone chips together for the team colors.
. 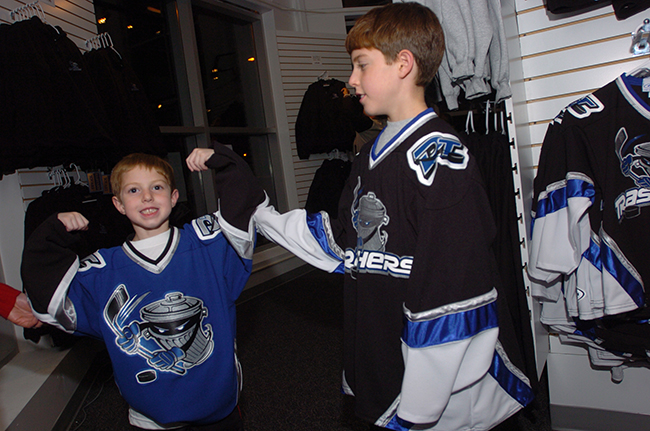 .
It really was a complete identity system. They had a contest to name the logo and the winner was ‘Scrappy’… dual reference to being scrappy on the ice and the scrap metal business. They called us in to create every detail of the brand. We designed a team bus, we wrapped the Zamboni ice resurfacing machine, we created merchandise and signage for the arena. We designed the jerseys with a custom alphabet and numbers. I remember that they wanted the numbers on the jerseys to be extra large “large the numbers on a NASCAR.” The system included secondary logos and team mantras, all created with the same look and feel. There was even a 50 foot mural in the arena depicting Scrappy scoring a goal.
. 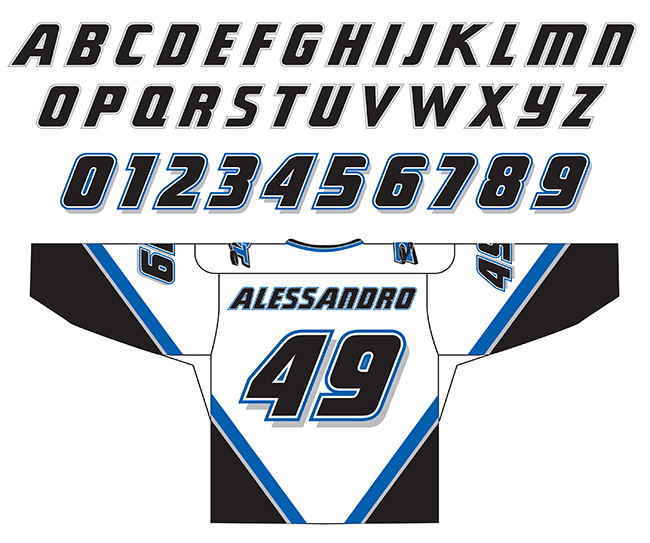 .
The FBI had their eyes on the team and they ended up building a RICO case against Galante. The Trashers only lasted two seasons. The team has not been on the ice in 15 years but the story and the logo lives on thanks to Netflix. It is amazing to see the logo have a second life. The physical part of pro hockey has evolved with less emphasis on fighting and teams having an ‘enforcer’. You see in the Netflix documentary that the Trashers played that type of old time hockey, so the logo is sort of a badge for all of the fans who miss it. It was ‘Bad Boy’ hockey at its best.
.

.
I think the logo is timeless because there is a subtle mystery about the monster. Yes its a garbage can, but the face is not on the can. The can is not the monster, he is inside. You only see the eyes so you aren’t actually sure what the monster looks like. I think the most successful sports logos hint at the main character without showing it. There is intrigue and mystery about what it actually is. The new NHL Seattle Kraken logo does the same thing. It has a tentacle making an ’S” and one eye but it doesn’t show the full Kraken monster, I hope they never do. It is the subtle mystery that engages the fans.
. 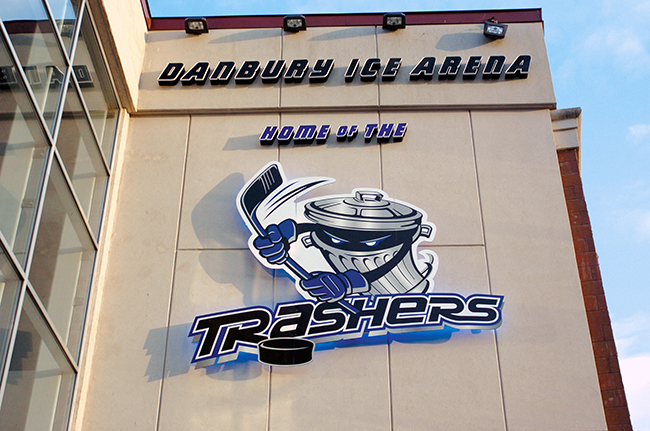 .
AW works mostly on consumer brand packaging but also identities. Whether it’s a package or a logo, we are always trying to bring a specific strategy or brand message to life. In packaging, you have multiple elements to help you communicate; a brand logo, product photography, backgrounds and textures, copy points, etc. In a logo, you have one shot. You have to try to convey the message with one image.
.

.
Sports branding is the ultimate because there is so much passion and emotion involved. Team logos become a part of fans’ personal identities. Its’ amazing to see people around the local community wearing the logo on merchandise. You realize they made a decision, not only to support a hockey team but to bring a little bit of the ‘Bad Boy’ persona into their own identity. I know of at least three people who have Trashers tattoos! That is brand commitment if you ask me.
. 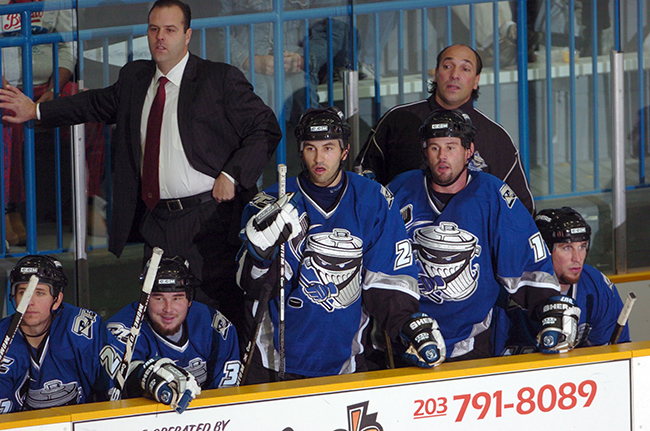 .
We have created identities for three other minor league teams since the Trashers; Danbury Whalers, Titans and the current HatTricks. Working in minor league sports is very gratifying because you see the impact your logo has on the local community. The minors are fun but maybe one day we will get ‘called up’ to the NHL!
. 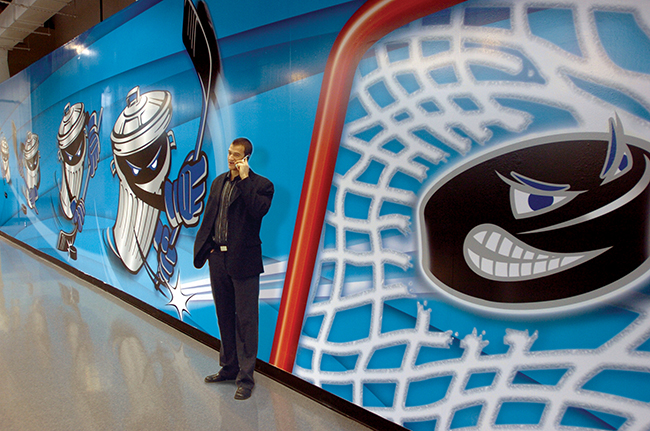