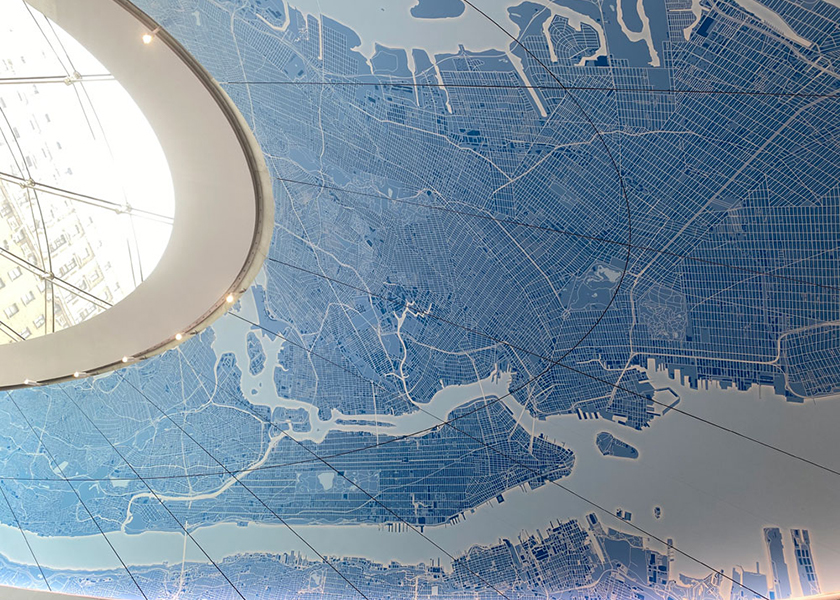 As part of the revitalization of Penn Station, the Metropolitan Transportation Authority Construction and Development (MTA C&D) commissioned a 1,988-square-foot map of metropolitan New York to encircle and enhance the glass and steel funnel shaped spandrel that towers above the escalators and stairway at the East End Gateway entrance to the transit hub. Creative Source, a multi-disciplined design firm, was selected to design the experiential graphic illustration by global engineering consulting firm WSP USA. Led by president and creative director Carol Smith, Creative Source also designed the iconic gold-and-blue MetroCard for the MTA some 22 years ago.

Of the map project, Smith explains that “the goal of the MTA C&D was to create a ‘true entrance’ at 7 th Avenue and 33 rd Street to provide commuters with access to the Long Island Rail Road (LIRR) Main Concourse, which connects to the Moynihan Train Hall on 8th Avenue, and New York City Transit subways. We offered the MTA C&D two design choices at the project’s onset— a map of Manhattan and the five boroughs and a map of the greater New York City Metropolitan area. The MTA C&D selected the latter because of its aesthetic composition and inclusivity for most of Penn Station’s ridership. Our designers based the map off a satellite view of the greater New York City Metropolitan area, and used portions of the surrounding suburbs of Long Island and Westchester extending around the sides and encompassing a portion of the LIRR ridership communities.”

The massive interior graphic features detailed geographic information from West Point, down the Hudson River to Staten Island, and out to the Robert Moses Causeway on Long Island. “When riding the escalator, there is the sensation of traveling through the interior of a three-dimensional painting, several stories high,” says Smith. 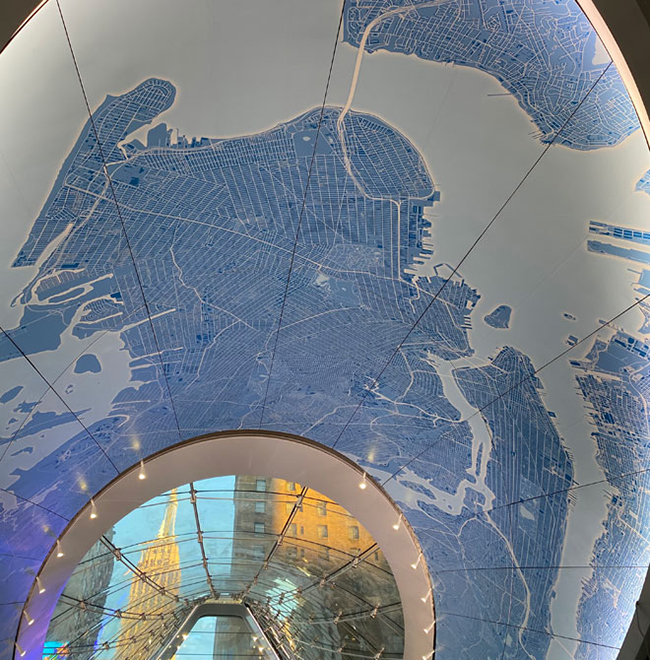 Smith notes that the Creative Source designers confronted many challenges, none more daunting than accommodating the double compound curve of the ceiling area surrounding the spandrel to include as much of the New York region as possible without distortion. Smith says that the design team went through several different iterations of how “zoomed in” or “zoomed out” the scale of the map should be. “The gigantic size of the graphic file required a super computer, in order to handle the amount of detail needed. The moving pieces had to constantly be balanced and readjusted to ensure the integrity of the finished product, as any changes to the scale or the complex lighting design had cascading impacts to the color palette. Our designers developed dozens of blue palette variations designed to ensure the piece would ‘pop’ and provide commuters with a ‘wow’ factor as they enter or exit. Finally, we were already facing a tight schedule to finish this project on time and on budget when the COVID-19 pandemic hit, which created unique challenges related to scheduling and ‘mapping out’ logistics. Going forward, all of our team meetings had to be held virtually.”
.
Creative Source also collaborated with the implementation team from Duggal Visual Solutions, which was working under Penn Station project developer Skanska Realty Trust. The Creative Source designers mapped the tri-state area onto a flat plane and Proptogroup, a design and fabrication studio working with Duggal, remapped that representation onto a doubly curved parabolic surface using UV mapping, which allowed for the manipulation of the final visual field while maintaining spatial relationships.
.
The result is “spectacular,” concludes Smith. “For visitors just arriving at Penn Station, the map serves to welcome them to New York as they ascend up into the city via the new entrance. For departing passengers, it depicts the greater region and popular commuter destinations.” The East End Gateway project was dedicated during a ceremony in December 2020 to the essential workers who depended on the region’s mass transit system and those who kept it moving.