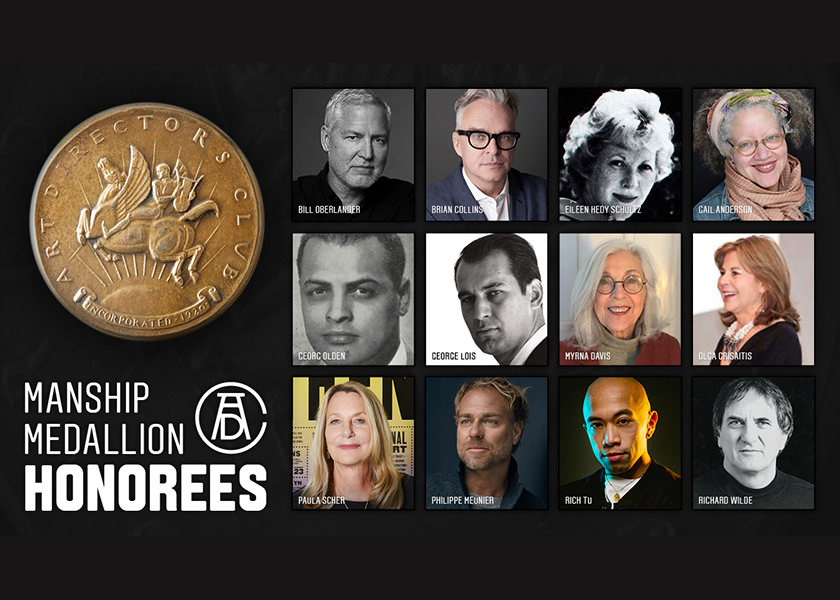 In honor of their contributions to ADC (founded as the Art Directors Club) over the past century, 12 leaders in the creative community will receive the prestigious Manship Medallion at the ADC 101st Annual Awards ceremony on May 18 in Manhattan.

When ADC was formed in 1920, its highest award accolade was the medallion created by famed sculptor Paul Manship, renowned for the Prometheus sculpture in Rockefeller Center. The medallion depicts Apollo, god of the sun and leader of the Muses, flying on Pegasus, symbol of inspiration. The Muses are represented by the strings of his lyre. The medallion trophy was later replaced with the iconic ADC Cube.

In celebration of ADC’s first century, The One Club has revived the Manship Medallion, but with a different focus: to honor a select group of industry innovators who played a significant role in ADC history and development over the years. “As ADC moves into its second century, we thought it was the perfect time to bring back this historic medallion, not to award work but as a rare honor bestowed upon a select group of creative leaders who have played enormous roles in shaping ADC throughout its first 100 years,” says Kevin Swanepoel, CEO, The One Club. “While congratulations are in order, a sincere thanks is also appropriate. Without the efforts of these honorees, ADC would not have played such an important part in the world of advertising and design.”

The Manship Medallion honorees are:

Gail Anderson, designer and chair of BFA Design and BFA Advertising at the School of Visual Art, past host of ADC Saturday Career Workshops, current board member of The One Club.

Brian Collins, CCO at COLLINS, ADC board member who initiated the club’s annual “Designism: Design for Social Change” forum and Designism Cube special award for work that promotes positive societal and political change, organized numerous exhibitions and talks at the ADC Gallery, current One Club board member and treasurer.

George Lois, ADC past president when ADC and The Copy Club joined forces to create The One Show, initiated the Art Directors Club Hall of Fame when president, ADC Hall of Fame laureate.

Phillippe Meunier, cofounder/creative chief at Sid Lee, ADC past president when ADC merged with The One Club to form The One Club for Creativity.

Georg Olden, graphic designer who was the first African-American member of the Art Directors Club, served as an ADC officer and contributed to the design of ADC Annuals.

Paula Scher, designer, partner, Pentagram, ADC Hall of Fame laureate who designed a number of Annuals and reiterated the club’s monogram in 2002.

Eileen Hedy Schultz, professor of Graphic Arts, School of Visual Arts, the first and only woman to serve as ADC president, a champion for arts education.

Richard Wilde, former chair BFA Advertising and BFA Design departments at School of Visual Arts, ADC Hall of Fame and The One Club Educator’s Hall of Fame laureate, past ADC board member, actively involved in the early years of the club’s Saturday Career Workshops for high school students.

The ADC’s 101st Annual Awards ceremony will take place in-person during Creative Week 2022 on Wednesday, May 18 at Gotham Hall in New York. In addition to celebrating the Manship Medallion honorees and this year’s top winners including Best of Show, Best of Discipline and other special awards, the evening will feature a belated celebration of ADC’s historic 100th anniversary, which was postponed last year due to the pandemic, and include important members and winners from throughout history.